Dublin feels big, robust, substantial. Its population is not quite 1.3 million, almost identical to the city of Calgary, and twice the size of the city of Vancouver, the two cities I have tried on the most. Dublin’s metro area is 1.8 million compared to Vancouver’s, at 2.5 million, and Calgary’s, at 1.4 million. Similar sizes, really, and yet Dublin weighs more, to me, and I’ve been trying to understand why.

There is not a single skyscraper in sight, and only a handful of buildings higher than 5 or 6 stories. But the buildings are solid and blocky and stand shoulder to shoulder, hip to hip, and close to the sidewalks or roadways. The main roads through the city are wide, and often divided by the River Liffey, further broadening the distance between the banks of buildings on either side. Many cobblestone streets have been pedestrianized, creating wide sidewalks filled with commuters and shoppers, especially at this pre-Christmas time of year. 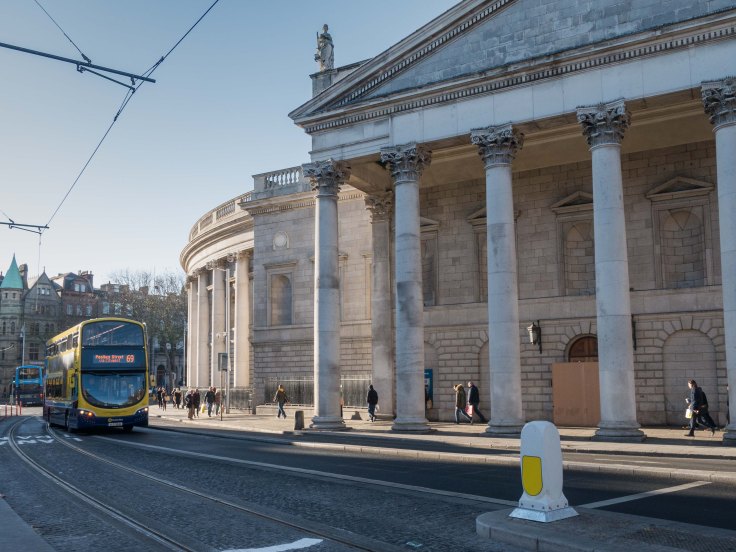 Perhaps this perception of size is partly because we have spent most of the last 3 months in and around small villages joined by narrow roadways, and this is our first visit to a major city in a while. There is a lot going on here, and we have walked and walked (about 40km in the first 4 days), exploring its different areas. 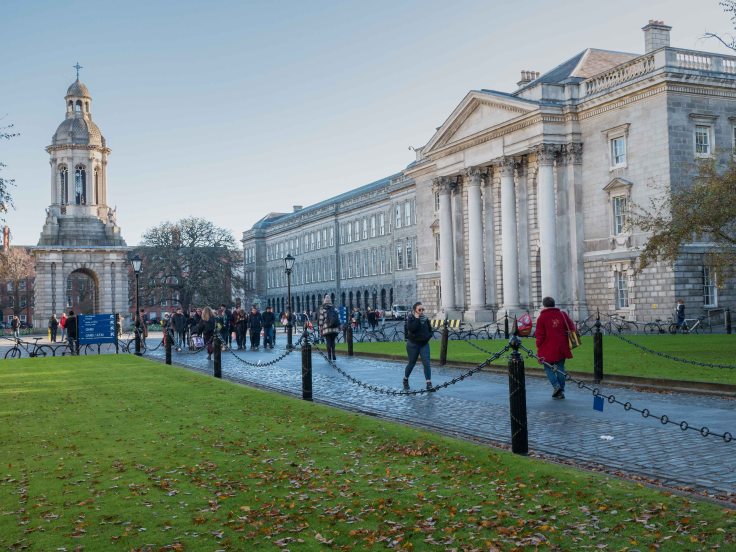 The Spire is an odd, needle-shaped, stainless steel sculpture in the center of the shopping district. It stands about 120m high, is 3m wide at its base, and is positioned on the meridian of O’Connell Street. At night, the light on its point makes it easy to navigate to that area. It seems to have become the de facto meeting place for friends and tour groups, and you can always find people leaning against it or hanging out nearby.

The River Liffey cuts roughly east-west through the city of Dublin. Though not as applicable now, one’s socioeconomic status could be determined based on which side of the river you came from. Our AirBnB is south of the Liffey, and just south of the Grand Canal.

The Medieval Quarter is, not surprisingly, the oldest area of the city, and houses key medieval structures and sections of old city walls.

Temple Bar, a neighborhood running alongside the River Liffey, is the restaurant and nightlife district of Dublin. It’s cobblestone streets are full of color and quirkiness.

Since we had already been walking so much through Dublin, we decided to forego the city’s Free Walking Tour and, instead, join the same organization’s Pub Culture Tour. They offered a non-drinking ticket, which made it suitable for both of us. We met at The Spire (see above) and walked to Capel Street on the north side of the Liffey. From there, our 3 pubs for the evening were close by. Our group was only 4, plus the tour guide. Though not the lively social evening we envisioned, the small group made for easy conversation, and it allowed us to squeeze into the last tiny bar to listen to a bit of a trad session, the traditional jam sessions that take place at pubs all around Ireland. 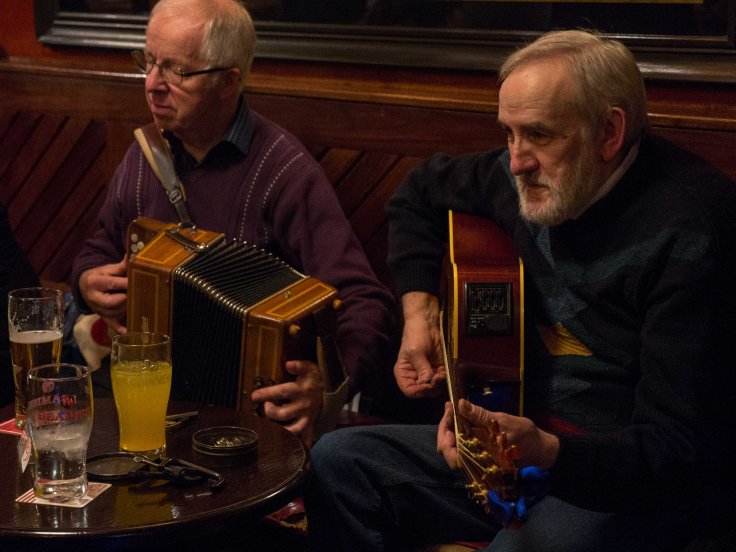 One thought on “Dublin: First impressions”