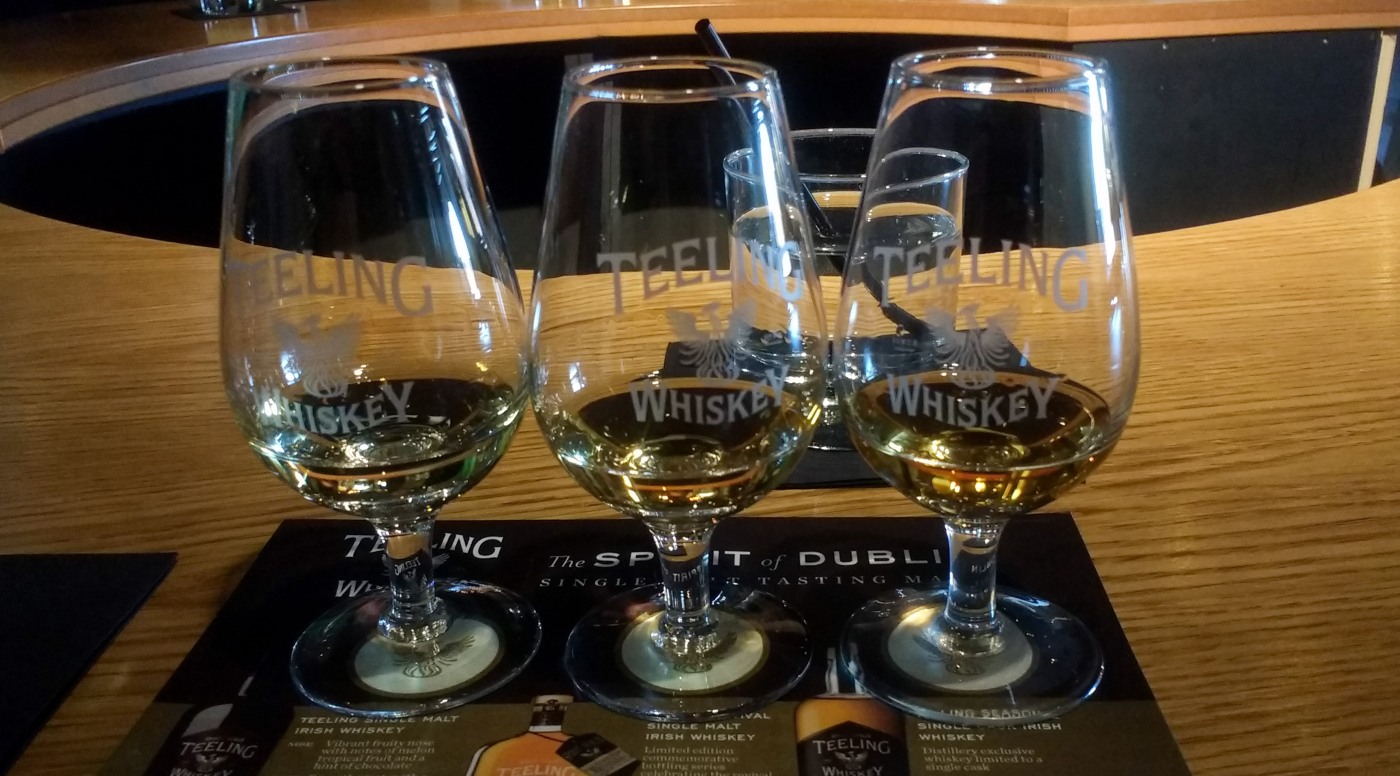 Here in Ireland, I have had the pleasure of sampling a few Irish whiskeys and a number of  Irish beers.

On our Pub Culture Tour, we learned how the craft (small batch) beer market has grown in Ireland over the last couple of years following in the footsteps of Canada and the USA. However, Ireland is millennia ahead of us in beer-making experience and it shows with the quality and variety of choices. During the same tour, our tour guide James also gave us the Guinness 101 lecture and accompanying tasting. James’ presentation was perfection. I have a new-found appreciation for this famous stout. It really does taste better 2 miles away from the Guinness brewery than it does 7200 km away in Western Canada. In fact, James recommended never drinking Guiness outside of Ireland–the difference is that profound. It is a beverage that has to be imbibed fresh!

On the same tour, we learned about the history and production processes of Irish whiskey (known as uisce beatha, a Gaelic phrase meaning water of life). Here in Dublin, Irish whiskey is as prevalent in the spirits culture as Guinness is in the beer one.  We were treated to a tasting of Teeling single malt whiskey, and I was hooked. It inspired me to check out their distillery here in Dublin.

Teeling Distillery, right in our neighborhood here in Dublin, was definitely worth the visit. The tour of their facility was the best whiskey tour I have had so far. They opened with a very informative film introducing the founders–two young sons of a historic whiskey distilling family. Their passion for the family’s whiskey heritage dating from the mid 18th century was evident in their distilling processes, blending modern techniques and historic practices. Even the pot stills demonstrated the family connection, with each of them named after the daughters of one of the founders. The guide was very knowledgeable and well organized, keeping us on track throughout the presentation and making sure we all had the time we wanted at each process. They were very open to guests taking pictures and the guide made sure we were all satisfied before moving on.

Our last stop of the tour was a mock barrel-storage area and then we moved into the tasting room. In 1875, there was a massive distillery fire in the Liberties district of Dublin, fueled by rivers of whiskey escaping from damaged barrels. It threatened to destroy the entire city. As a result, laws were passed that prevents any storage of whiskey in barrels within the city of Dublin, and distillers are forced to keep their products in warehouses outside of the city.

The Teeling products are some of the finest whiskeys I have sampled and I will definitely look them up next chance I get when I’m back in Canada (and can purchase a full bottle!).

Teeling Distillery tour cost: €30 with 4 tastings (but it was supposed to be 3).