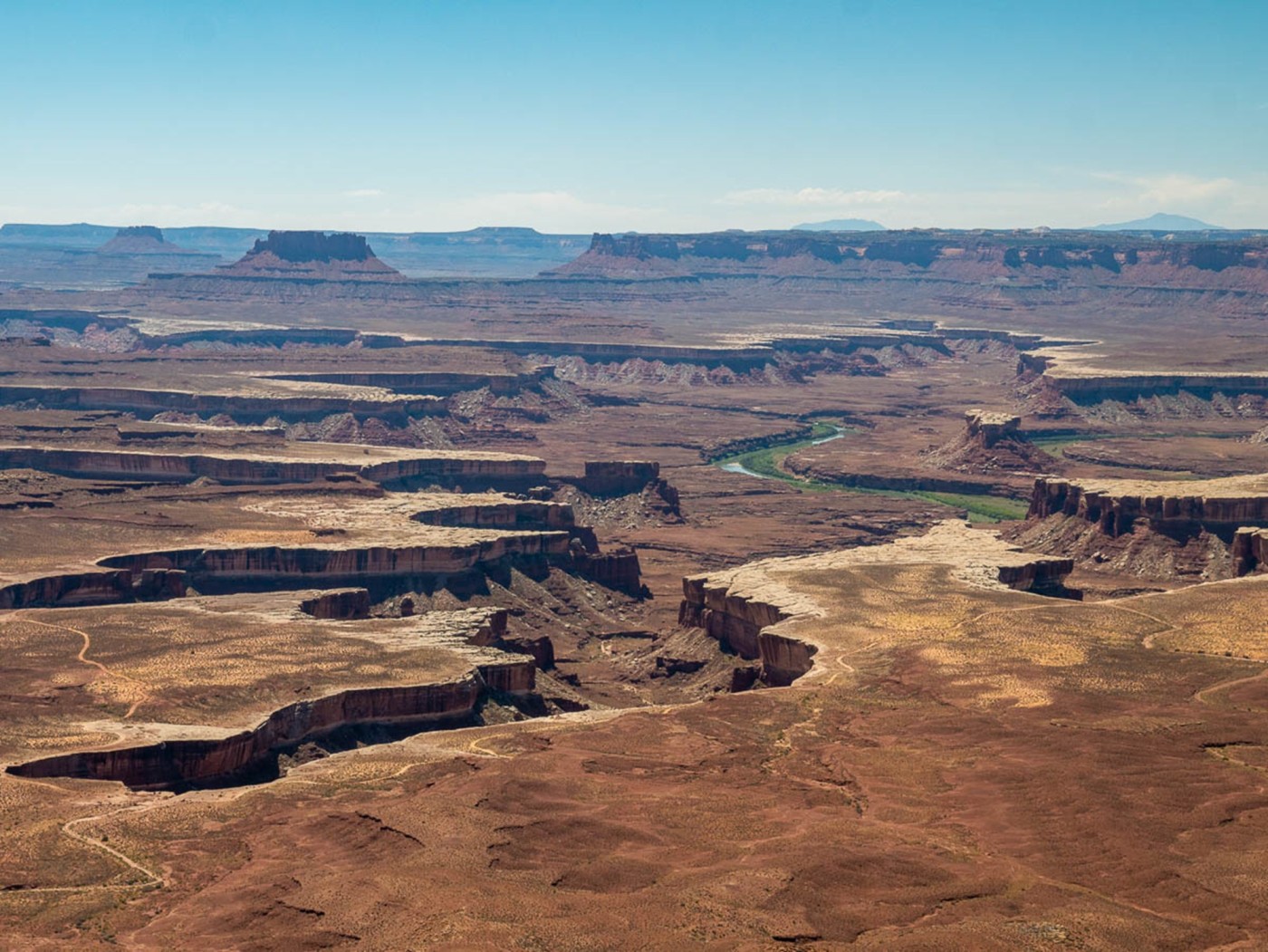 From our campsite at Green River State Park we drove just over an hour to Canyonlands National Park. We thought we would arrive much later than we did, so had planned the afternoon in Canyonlands, a night of camping, and then a full day at very nearby Arches National Park.

The drive was shorter than we thought, we managed an early start, and we drove through to the visitor center by about 9:00 am.

It was about 26°C, a reasonable temperature for a hike. This park is enormous and includes three distinct regions, one of which is limited to four-wheel-drive vehicles. We didn’t want to spend the entire day, so chose to visit the Island in the Sky area of the park. We drove the scenic road to one end and hiked out to Grand View Point Overlook. The hike wasn’t difficult but, of course, we had to climb the rocks at the very end, which added a bit of a challenge, and then it was quite hot by the time we got back to Artie.

I thought I’d had enough heat and sun for the day but, besides checking out other viewpoints that were accessible right from the parking areas, we had planned one more short hike to Mesa Arch.

By the time we drove away from Canyonlands and into the Arches visitor center to pick up maps and info so we could plan the next morning, Artie’s external thermometer was reading 36.5°C. We knew if we wanted to do any hikes at Arches the next day, we would need to get a very early start.

We drove into Moab, the town that advertises itself as the base for visiting these two national parks. It clearly is about tourism and outdoor adventures, with many hotels, campgrounds, Jeep and ATV rental locations, and not a lot else that we could see. Several of the national parks and monuments that we have been to (or the areas that surround them) market themselves as locations for mountain biking, canyoneering, rock climbing and off-road driving. We saw little evidence of any of these activities—perhaps we were not in the same areas, or they are more popular at other times of the year.

Our next little adventure was trying to find our boondocking spot for the night. I had used Campendium to locate a well-reviewed spot just outside of Arches National Park. I had copied the GPS coordinates for Willow Springs Trail into my calendar and then used that to locate the camping sites. Google Maps sent us down a road that required a high-clearance four-wheel-drive vehicle. I was holding on to Artie’s handles for dear life while Ken navigated the peaks and valleys—he having fun (but being as careful as he could) and me in high-stress mode.

We were about to turn around anyway, but came to a fence and could go no farther. I couldn’t understand how this could be since the site had 50 reviews and comments like “easy to find” and “a breeze for my big rig.” Thankfully I had a little cell service so scrambled to find other posts about this place and came across another set of coordinates that had us continuing along the highway for another four kilometres or so before turning onto the correct road, which was gravel, but not an amusement park ride. We found a spot that even had a small tree for shade where we hung out until the sun went down.

Given the crazy temperatures that were predicted to continue, we wanted to get an early start at Arches. I also wanted to be able to photograph at least some of the sites in the early morning’s golden light. Though we got up at 5:30 we hadn’t done a very good job of calculating a) when the sun would rise, and b) how long it would take us to get back out of our campsite, around to the park entrance, and then up into the mountains to places we wanted to hike and see. However, even though we weren’t up at Delicate Arch with the sunrise crowd, we were really happy to be out early enough to drive the full scenic route, hike to several arches, and stop at most of the viewpoints on the way back before it hit 30°C.

It was time to leave the national parks of Southern Utah and head north.