Today was our last day in Cuenca. We said goodbye to a very comfortable AirBnB suite, grabbed a cab (caught one of the taxi drivers as he finished eating breakfast from the red pick-up truck that parks across the street every day and serves up breakfast), and headed for the Terminal Terrestre (bus terminal). Cab ride: $2. Before we leave Cuenca, though, our last thoughts on this city.

In general, Cuenca is a really clean city. In town where we were living, everyone puts their garbage out on the edge of the sidewalk 3 days/week (M/W/F), and in the evening it is picked up. We often put out a separate bag with returnable bottles, and it would be whisked off before the garbage truck came by. Throughout el centro, men and women in pale blue coveralls push rolling carts with garbage cans, brooms and dustpans around, sweeping up the sidewalks and streets as they go.

Though buses are frequent and plentiful, the air is significantly fresher than in Quito. Probably partly due to geography (Cuenca is surrounded by mountains, but it isn’t deep in a valley the way Quito is), and partly due to the smaller city size.

Except where Cuenca’s megaproject–a new rail-based transit system–is under construction, the el centro part of the city is based on a grid and very easy to find your way around. Though the rail line construction goes right down the center of two streets for miles, it (mostly) doesn’t impede the movement of pedestrians in town. (The cab drivers have to deal with a lot of closed intersections and streets. They know how to do it, but it can increase the cost of a trip by 50 cents or so.)

Sidewalks are better than in Quito in that there aren’t any uncovered excavations or plastic tubes protruding several inches, and most access covers are flush. But in el centro, the streets are old and mostly cobblestones and there are still plenty of tripping opportunities. Sidewalks can be wide and spacious at one point, and then narrow or non-existent a bit farther along, where buildings jut out and take over. Sidewalks are quite high off the street, with road-side edges that suddenly drop away to vehicle ramps , and building-side edges that are built up with two narrow ramps for wheelbarrows or other vehicles. Most access covers are flush to the sidewalk, which eliminates one hazard (compared with Quito).

Buses and taxis are plentiful and inexpensive. We only took a bus once (to Baños), but it was just 25 cents, easy to locate, and easy to use. You need to have exact change to pay, which you drop into the change box on your left as you climb the stairs. If you don’t have  exact change, you sit in the seat behind the change box and put your hand out when others board. You collect their money until you have the right amount of change (for example, if you only have a $1 coin, you collect 25 cents from 3 people and drop your $1 coin into the box), and then you can move to another seat. Other riders seem to have no problem giving the waiting passenger their coins. Sometimes your change isn’t useful to the person waiting (for example, someone was waiting for 25 cents and we boarded with a 50-cent coin), so you just drop your coins into the payment box.

Watch out for quick starts and stops on the buses. The drivers don’t wait for you to sit down, and they barely stop long enough for you to jump off. Hold on tight!

When we were tired of walking all day, we sometimes waved down a cab. I think the most we paid to get us home was $2.05, and that was due to the aforementioned detouring around closed streets.

We had myriad options for groceries. Around the corner and several blocks down from our accommodation was a small general store that is  very well stocked for its size. Our AirBnB host, Travis, recommended it because they use scanning technology and, therefore, didn’t apply “gringo pricing,” which he said was a reality with some vendors.

Many little shops do not allow customers to come inside. Instead, the proprietor stays behind a pattern of steel bars with just a small opening for exchanging products and money. One of these shops is just a half-block west of where we stayed, and was a great spot for picking up milk or other items. East and around the corner is one of Travis’s recommended panaderias (bakeries), where we picked up coffee break treats for as little as 15 cents each, or empanadas with meat (today’s lunch on the bus) for, hmm, maybe $1.25 each.

A little farther down the same street is a produce shop. The produce and the proprietor are behind a low fence, so you can see what is there and point to the items you want. Though sometimes her prices were a little higher than at the mercado ($1.25 for a pound of strawberries vs. $1.00 at the mercado) most of the time her prices were fair and she kept a good selection.

And of course there are the mercados for produce, meats, seafood. We loved to explore them, even when we had no need to purchase. 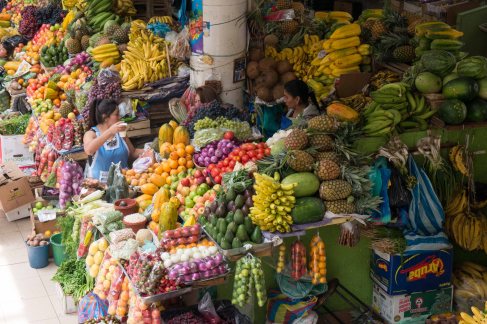 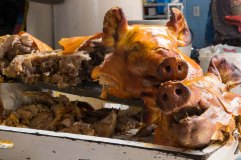 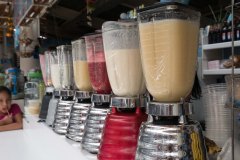 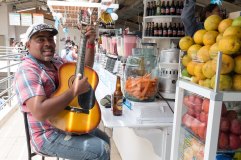 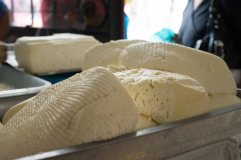 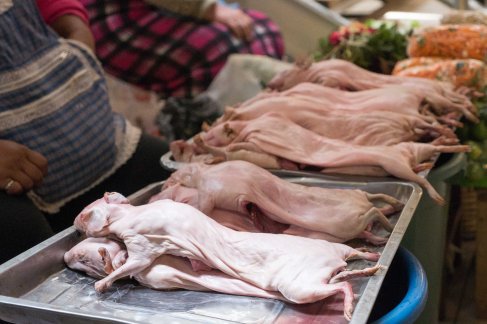 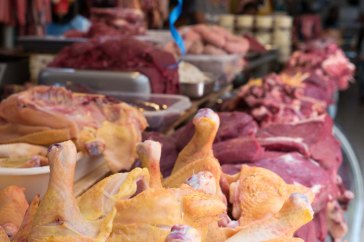 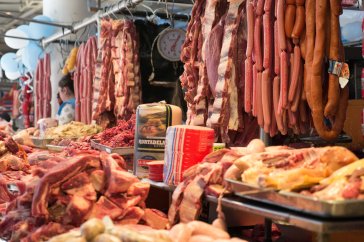 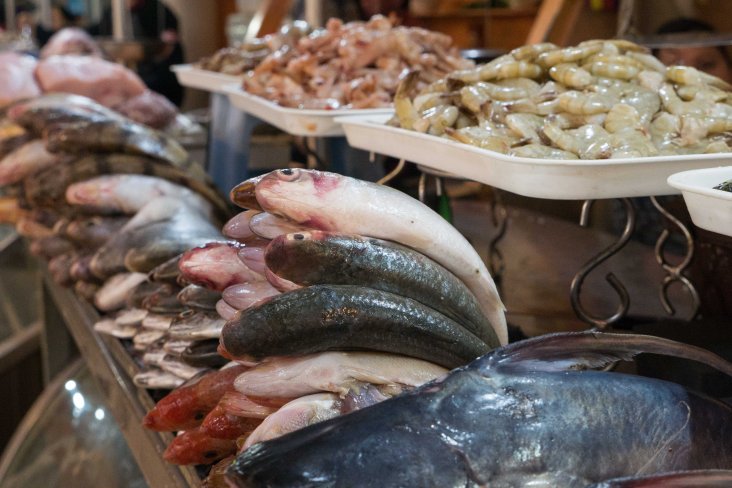 For items we couldn’t find at these shops or markets, we also had several supermercados to choose from, including Supermaxi, Coral, or Tia.

We felt safer in Cuenca than we did in Quito. When we walked after dark in the neighbourhood we lived in, we mostly saw families out and about.We only had one suspicious incident and it was during the day. We were walking by a touristy plaza and a young female started running over with her cell phone up asking about taking a photo of us. Several other teens headed over behind her, so we quickly crossed the road, kept moving, and they dispersed.

Overall, though, the lack of crowds, the plethora of street-side shops, the many beautiful plazas and churches,  and the four rivers running through the city, all helped to make us feel much more relaxed and less wary. 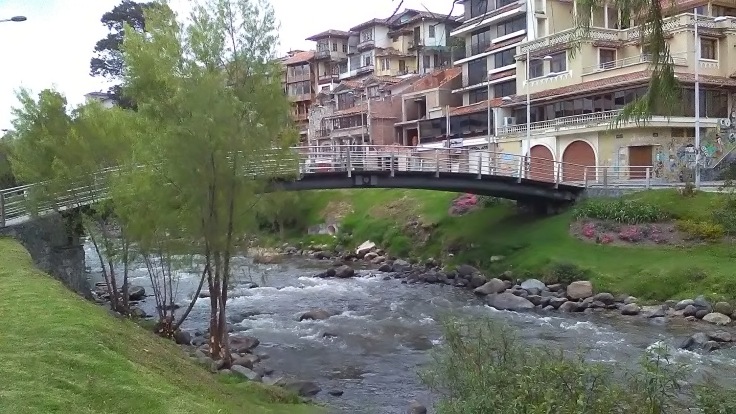 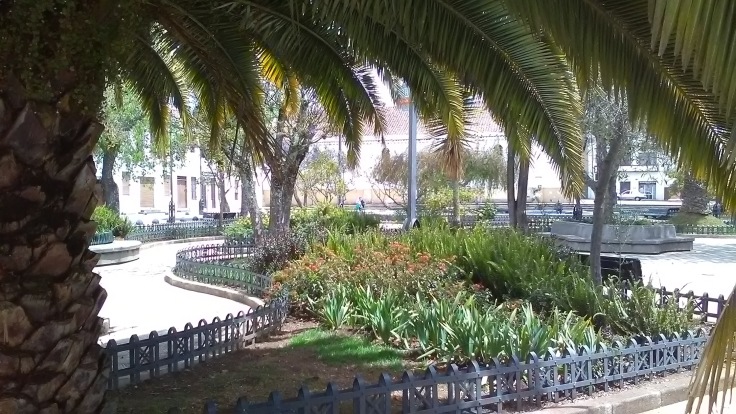 Our accommodation was really quiet–we slept well and woke up to birds chirping rather than horns honking.

Cuenca is smaller, quieter city, and just felt a lot less intense than Quito, our only Ecuadorian comparison to date.

Is Cuenca that place? If it weren’t up in the mountains and away from the ocean, perhaps it could be. But we have a lot of ocean-side locations to explore before we make any commitments!