Getting around Ecuador is quite affordable with several options available. Flights between major cities are short and ticket prices reflect that. Buses are cheap, can be very comfortable. you don’t have to endure airport security or arrive two hours ahead, and you get to see a lot more of the countryside. From Cuenca to Guayaquil, and as we explore the Ecuadorian coast before heading to Quito on November 28 for our flight to Colombia, we will be moving around this country mostly by bus.

Terminal Terrestre is a major public transportation hub for Cuenca, and a bit overwhelming at first. We had been told to go to the ticket booth “in the center.” We found one that was detached from the rest but couldn’t see if we were in the center of the terminal (the sign on the booth was Atrain Alianza). We purchased two tickets on the next bus to Guayaquil ($8 each), and then searched for a way out to where the buses were parked.  We found a security gate, showed the guard behind it our ticket and asked if we were in the right place. He checked our ticket looking for the bus number (19), turned around, looked through the window, and pointed to our bus right behind him.

A sign at the gate indicated that we were to put 10 cents into the machine (not sure what for, but we wouldn’t get to our bus without paying), which we did with the assistance of the guard. He took the machine’s printed tickets, and scanned us through after we put our luggage onto the nearby conveyor belt. We assume the bags were being screened (though this was only for our two suitcases–none of our carry-on bags) before they were sent through to the other side of the glass. We went through the gate and joined our luggage in front of the bus. We wondered how the guard knew that the bus was correct, and then found the number 19 on the front bumper, passenger side.

Once the driver arrived and loaded our bags underneath, we got onboard, selected our seats, and settled in. A few minutes later, a fellow told us we weren’t in the correct seats, and gestured to his ticket. We didn’t realize that seat numbers were also assigned. They are displayed clearly on the ticket if you know to look for them.

The route for the trip is west through the Andes mountains. By distance, this represents half the trip; by time it is three quarters. Nothing could prepare us for the sharp, twisting jagged switchbacks and steep slopes of these rugged mountains, not even many trips through the  Canadian Rocky Mountain passes. At the summit we were 13,500 feet above sea level, high above the tree line, with only shrubs and grasses whizzing by the bus windows (not optimal for taking photos). 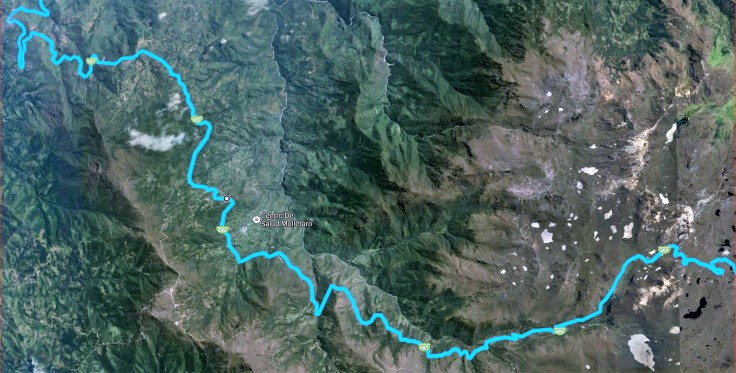 As we headed back down the mountainside, the vegetation changed to lush tropical jungle. The mountainous part of the trip ended abruptly, and we sailed smoothly and quickly into hot and humid, tidal-river surrounded Guayaquil.