Life has been quite slow in and around this small mountain town. We didn’t have a long list of sites and attractions we felt we had to see, so we’ve just been meandering through the days, exploring here and there. This post captures some thoughts about the last few weeks in the Boquete area.

This area is made up of hills and valleys, carpeted in greenery including the ubiquitous coffee plantations, and liberally sprinkled with flowers. There are creeks criss-crossing the town, and waterfalls splashing down the hillsides.

Though it was certainly easier to find fresh produce than it was in Pedasí, we were still surprised at the small spaces dedicated to produce in the larger stores. The Boquete area is considered the bread basket of the country, so we envisioned the large markets overflowing with produce (and fish, seafood, poultry) that we had seen in Ecuador.

The produce, in general, is quite fresh and in good condition. Across the street and up a bit from Romero, the large grocery store, is the Mercado—a building made up of many small tiendas or kiosks, where you can find locals selling produce, dry goods, poultry, and other sundries. Their prices are fairly close from one to the other, and similar to the larger stores, but it’s nice to wander through, pick what appeals, and buy from locals.

There is also a Tuesday market from 9:00-12:00 at Café Valle/BCP just across the bridge. This market is targeted at expats, with mixed expat/local vendors. Here you can find organic produce, including fresh herbs and other greens you probably can’t get elsewhere. At least one of the producers posts on the Boquete News Facebook page about what they have available. You can order direct for delivery at the market—they harvest to order. 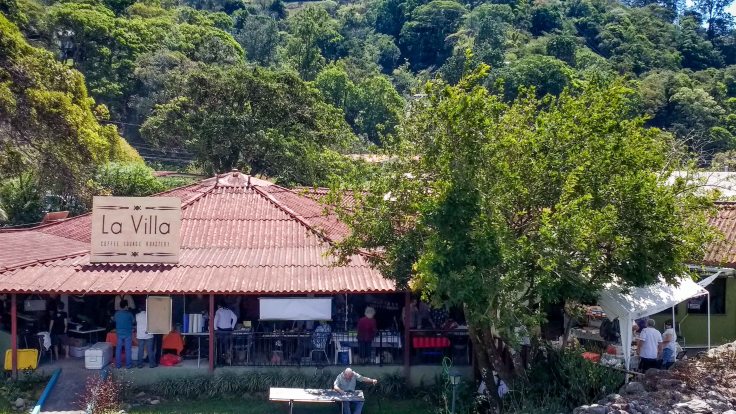 One great find at the Tuesday market, at least for us since we were only visiting the area for a month, was Two Guys and a Cooler. They make frozen dinner entrees for $7 to $10 for a meal for two. You can order on their website for delivery to the market, or just take your chances and buy when you arrive (go early, though, as the choices are limited by later in the morning). Everything we tried was delicious and added variety to our diet. Though we could make most things they offer easily enough, we felt that the price of a dinner balanced against finding and buying all of the ingredients (without waste at the end) was a fair trade.

Wander the main street and you will find many other shops, each one carrying a different selection of goods. You never know what treasure you will happen upon.

There are plenty of restaurants in town, though many of these are by expats for expats, and at expat prices. We enjoyed Taco Tuesdays at the Boquete Sandwich Shop (they post their daily specials on the Boquete News Facebook group–$1.50 tacos and sangria on Tuesdays), and the margaritas (ask for blended if you prefer) at Big Daddy’s ($4.95). Sugar and Spice bakery has yummy treats and quite reasonable prices (try their ginger snap cookies, 25 cents). 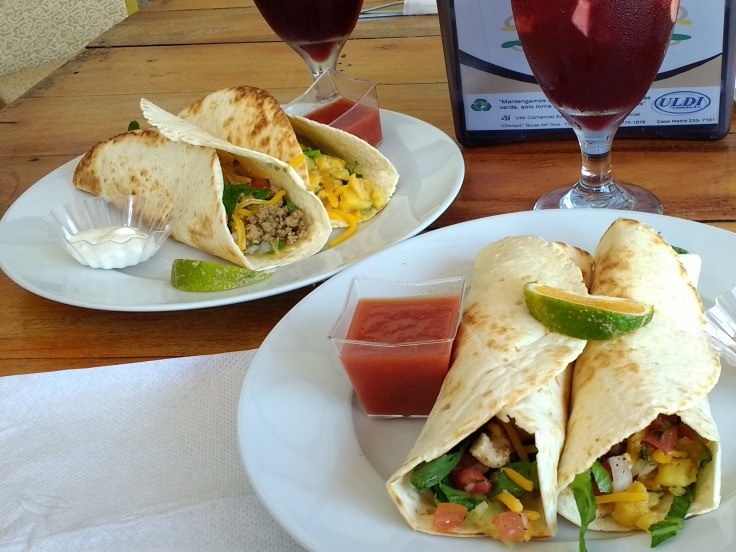 On this beautiful property, there are 4 cabanas in addition to the main house. A couple from Northern Alberta moved into the cabin next to us within a few days of our arrival. They are staying for almost 3 months. We enjoyed Gilbert and Theresa’s company on outings, at the pool, for dinners (both at the cabanas and out at restaurants), and playing games in the evenings. Theresa even surprised me with a birthday cake!

There are loads of options for hiking in this area, from pleasant trails to vigorous volcano expeditions. Ken talks about a few in Boquete: Hikes and Boquete: Pipeline Trail hike day.

With Gilbert and Theresa, our cabaña neighbours, we rented a car and, with the help of Boquete Travel Guide, had a wonderful day in the Caldera area. We hiked into, and swam in, the Hidden Waterfall’s swimming hole, enjoyed lunch at the travel guide’s recommended Restaurante Melissa, and were amazed by the River Canyon. We didn’t swim there as we arrived just as it was filling up with the after-school crowd, but we all agreed it was worth a return trip. 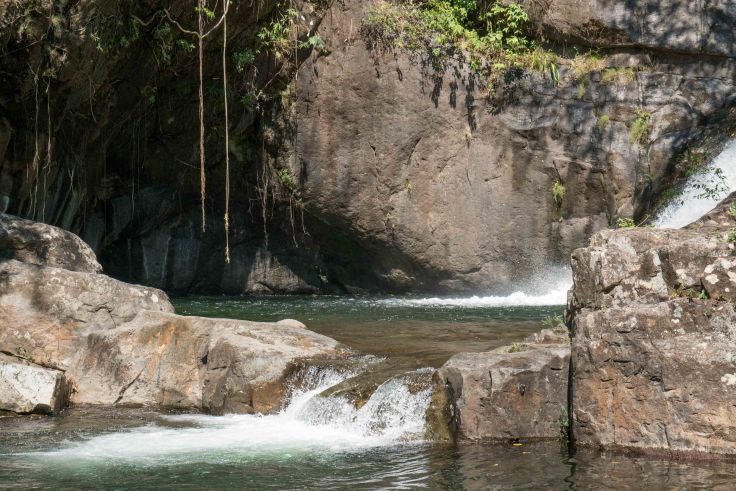 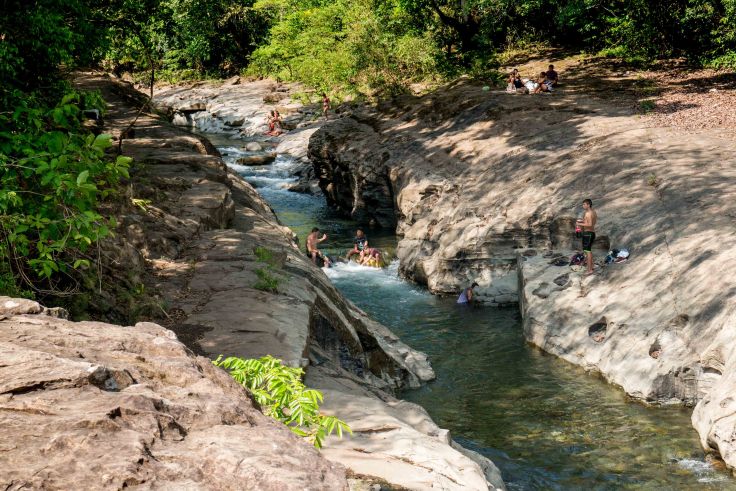 There are coffee plantations all around Boquete, and several offer tours. Our host recommended Cafe Ruiz, so the four of us bused into town, hiked up the hill to the coffee shop, loaded ourselves onto a bus, were driven back down the hill and out of town toward our accommodation, to get to one of the many plantations owned by Cafe Ruiz. Though they offer a shorter session, I had read in The Ambler‘s blog post that it was worth the $30 and 3 hours to do the complete tour. Despite a long monologue filled with groan-worthy jokes by the guide, Carlos, at the beginning of the tour, it still ended up being an interesting afternoon. 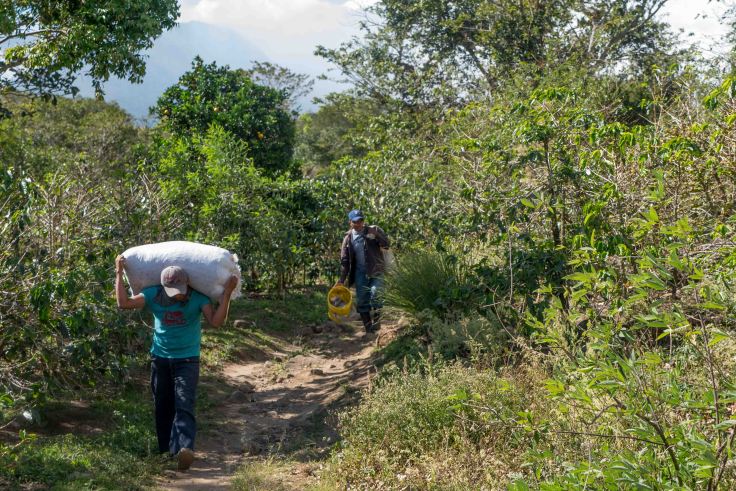 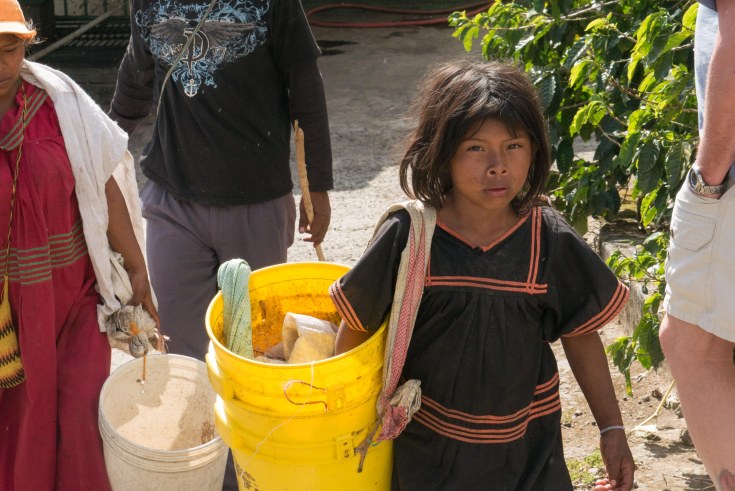 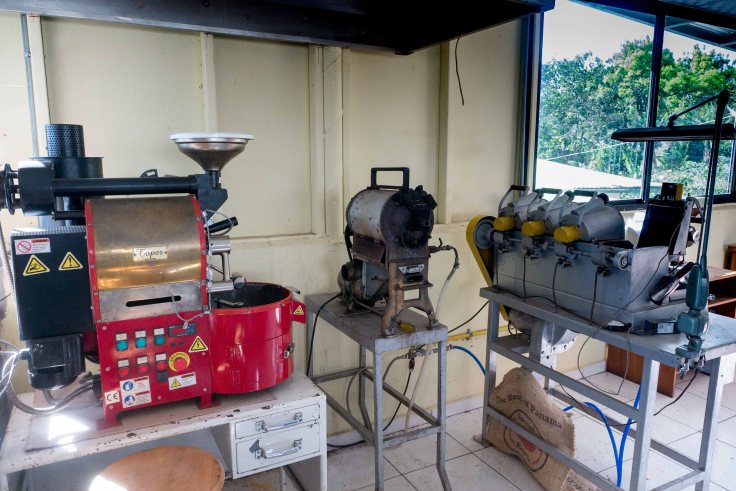 The Boquete Jazz and Blues Festival takes place in February every year (this was the 11th edition). It seems to be run by expats for expats, but it is quite a big deal, with talent coming in from the US and all over Latin America, and guests making a holiday of it in Boquete. The day-time venue, at La Valle Escondido resort, is lovely, and in the evening there are jam sessions and concerts around town. We signed up to volunteer on Saturday, which was a terrific opportunity to see what the festival was about, enjoy some great music, and see a different part of Boquete than we probably would have on our own.

I talked about Getting in and out of town in Boquete: The first 10 days. Here is a bit more detail gleaned from the last 3 weeks of our visit.

Buses travel the highway between David and Boquete, as well as to and from other barrios off the main highway. Buses can be vans, old yellow school buses, or even comfortable touring buses. You just have to watch the front window for route information (e.g., Boquete – David, or La Caldera – Boquete). If you’re heading into town and the vehicle says Boquete, wave it down. If they have room, they might honk or flash their lights, expecting you to respond with a wave if you want to get on. From where we were staying, about 10km outside of Boquete, a trip into town cost 80 cents. You pay when you get off, so if the person taking money doesn’t remember where you got on, you may be charged more. After a few different charges, we figured out we just needed to tell them where we got on (La Tranca). Even better (but not necessary) is to hand over the right change. The trip to David, traveling on the same highway in the other direction. seems to run anywhere between $1.50 and $1.75.

Buses can be very crowded, with at least 3 people sitting on what seems like a large 2-person seat, or 2 people on a large 1-person seat. Lots of one-cheek perching and knee-banging in the aisles. The driver’s assistant makes sure everyone has a seat at the beginning of a run, but as they pick up people along the way, standing seems to be just fine.

You can pretty much get off the bus where you want to, but you have to be able to tell the driver where. As you get near to your stop (unless it’s the terminus or a popular stop), holler parada (stop). In our case, we followed it by a la roca amarilla (at the yellow rock), as this was the best landmark to indicate the road to our inn.

If buses are full, they will not stop–we were passed by a few times. The buses don’t seem to have a particular schedule. We waited anywhere from 10 or 15 minutes to almost an hour, at which time we gave up and flagged down a cab.

Taxis seem to be prevalent enough, except during the above-mentioned festivals. Also, we found that they generally were unfamiliar with the name of our accommodation. We would describe the area to request a price, which could range from $2 (that cab we flagged down after waiting for a bus for an hour) to $7 between Boquete and our inn. Several times I used my own GPS to let them know where we were going since the street names don’t really have any meaning. And then there is the hill. The road into our inn is a bit rough in parts, and includes a short hill before a fairly smooth gravel section, and then a long, steep hill to arrive at the property. Many times we needed to convince the driver that he could make the trip and that the hill was safe (it has concrete tire tracks); and almost as many times, the driver asked us for more money once we arrived, because he had had to navigate the hill (we didn’t pay the extra–this is when having the correct change works in your favor!).

About .5km from our lodging is Cowboy Dave’s, a US expat who rents cars that are a couple of years old for a reasonable (in Panama) $35 per day, including insurance. We managed to rent a car from Dave a couple of times, but it was very difficult to plan. He doesn’t seem to take reservations, often doesn’t have any cars available (at least during the flower and coffee festival in January and the jazz and blues festival in February), or doesn’t know whether he will. The first time we rented a car, we waited until the flower and coffee festival was over. The second time we called for several days and finally Ken walked up at 8:00 in the morning to see if he could grab one before someone else scooped it up. He was successful, so we all hustled to make plans for the day.

Another car rental place in town rents cars for $45 per day, but during the jazz festival they set a 3-day minimum.

There are shuttle buses that go from the town of Boquete to Bocas del Toro, for example, at a cost of $30 each way (including water taxi to Bocas Town). When there were four of us we decided to rent a car instead for the three-day trip. We failed to book one (see Rental Cars, above), but when we went back to plan B, intending to book the shuttle for the following week, it was full. We weren’t as flexible as we would have liked since we were fitting it between my working days (Monday and Friday), so missed out on our Bocas trip, sadly.

And a few more bugs

Boquete is a nice town and area with lots of natural activities to participate in. Because the town is very small, most things are outside of Boquete and getting around would be much easier with a car. Boquete also feels like an expat town, or at least it did while we were there. It’s a nice place to visit, but it won’t be home for us.

2 thoughts on “Boquete: Our last words”