We took a short two-night side trip to Léon, Nicaragua, this week. We were just going to go for one night since I had 2 days free of work, but I squeezed in another night by leaving work a little early on Monday.

Ken was already in Managua at the dentist (subject of a future post), and I caught a ride in with our host at 3:00 pm when he went to pick up his kids. That put us in Managua by 4:00 where I met up with Ken at the school. From there, we hopped a local micro bus down the highway (40 NIO) to the UCA terminal, and caught a van from there to Léon (108 NIO). At the Léon terminal, we took a taxi (50 NIO) into our AirBnB lodging right in the center of town, arriving by about 6:30.

Our Léon host confirmed for us the safety of walking around town at night, recommended a nearby restaurant, and off we went to explore.

Dinner at Asados de Pelybuey was a pleasant surprise. The entrance of the restaurant was tiny, with only a small hot buffet table filled with pans of meats. We likely would not have stayed based on that, but we were hungry and tired. We asked if there was a place to sit since we couldn’t see anywhere, and were shown around the corner to a large restaurant in a typical colonial building with various eating areas, a garden, and a large barbecue oven. We each had a plate with meat, gallo pinto (traditional rice and beans side dish), coleslaw, and curry-seasoned flatbread chips, along with two beverages (water and soda–no alcohol here). The total bill, with tip, was 220 NIO or about $7.30 USD. 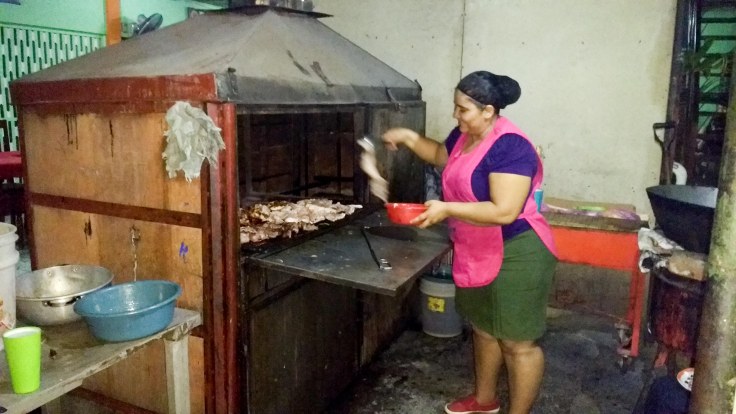 The next morning, we started our one full day in Léon with a 90-minute Free Walking Tour (suggested tip $5USD). It was a quick and easy way to learn about the challenges this city has faced as recently as 26 years ago. Though we didn’t cover that much geographical area (we didn’t need to), our guide, Alejandro, gave us a great history lesson supported by a mural painted on walls near the tour’s starting point, showed us some of the beautiful colonial structures such as the different university faculty buildings (this is a university town) and the rebuilt arts center.

We learned that the cathedral gets an external refresh every 40 years, and it takes about 5 years or so to complete the work.

Alejandro took us into a very calm and pleasant market just behind the cathedral, and explained a few of the mystery items on display there, including the many sweet treats that Nicaraguans enjoy.

After the tour, we stopped off at Jugoso for a refreshing batido (I’m keeping their menu as an ideas list for home-brewed smoothies).

Our host recommended the art gallery (Centro de Arte Fundación Ortiz Gurdian), which we had read good things about (104 NIO or $3.50 USD each). It is housed in a series of restored colonial homes and worth visiting at any time, but the current Goya-Dali exhibit was an additional draw.

We enjoyed the gallery, though two of the houses were closed for some sort of maintenance activity. Many of the viewpoints into these areas were covered with black plastic, but we were a bit shocked that we could see exposed, unprotected art on the walls. In many areas of the gallery there are overhead fans, but these were left off (while the lights were turned on and off as we made our way in and out of the different display areas), making our visit less of a respite from the heat than we had hoped.

Hot and tired, we sat in the park for a little while, enjoying the shade and the breeze.

Slightly refreshed, we decided to conquer the climb to the cathedral’s cupola ($3), which also gave us access, shoes off, to explore the building’s white, domed roof and some great views of the city and volcanoes beyond. 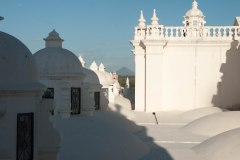 Again at the recommendation of our host, we spent sundown at El Mirador, a second-floor open bar offering beautiful sunset views. We enjoyed watching local youth juggle basketball and skateboarding activity on the court below. Something Alejandro had told us was a much improved situation from the gang clashes that occurred there regularly five years earlier.

The next morning, we decided to head back to Granada after breakfast. A cab to the terminal (be careful not to go to the terminal where all buses go to the playa/beach), a mini-bus to the Managua UCA, and another to Granada (where we got the driver to drop us off at the end of our road) took about 3 hours and cost 204 NIO, or just over $9 USD.