When we arrived in Zurich, we were met by one of our house-sit homeowners and driven about an hour to the town of Stans, Switzerland, our home for the next month. Along the way, I was surprised at the abundance of concrete infrastructure that loomed all around us–highway overpasses, tunnels, and bridges.

In our little village of about 8,000 people, though, it is mountains, rather than concrete, that surrounds us.

We are living in relative luxury this month in a penthouse apartment that takes up the entire floor. The elevator delivers us directly into the suite, and to panoramic views of the mountains all around us. The appliances are all top notch, and a once-a-week housekeeper minimizes the upkeep. We have 2 adorable Bengal cats for company.

Once our homeowners were safely on their way to a warm Australian holiday, and we were settled into our temporary home, we started to think about what we should do while here. We began researching and quickly became overwhelmed by the possibility of train trips, mountain railways, gondolas, and boat rides for exploring the lakes and mountains, and by the corresponding number of discount card and pricing options.

Going to the grocery store, we also quickly realized how challenging it will be without any German capability, as we are staying in a German-speaking area of Switzerland (though a bit of Italian and French and translating apps are helping me to read labels and know what I am buying). I had mentioned to our homeowner my feeble attempts to learn a bit of German. She counselled us that Swiss German is very different from Germany German, and that even folks who speak German are challenged by the dialect here. This news didn’t help our ability to communicate, but it did make me feel better about not spending a lot of time trying to learn the wrong version of the language.

In our first days, we spoke in English to a couple of younger folks–one was thrilled to be able to use her English because, in her words, nobody around here speaks English. The other indicated that most young people will have enough English to help us out, just as he did. The trick will be finding those young’uns when and where we need assistance.

Our lack of German brought out the best in a gentleman at the grocery store car park. We stood at the payment machine trying to pay our parking fee but, much to our dismay, the machine did not take credit cards and we did not have a small enough denomination of Swiss Francs (thank you ATM for the 100 CH notes!). The kind sir deduced our plight and offered us a coin. When we refused with thanks, he put it on top of our machine and completed his own transaction at his. We had no choice but to use his coin, returning the change to him with a laugh and a heartfelt danke (I remembered that much, at least).

Back to the out-trip research challenge. We walked to the train station to see if we could confirm our thoughts about discount cards so we could begin to plan some excursions. Our maps.me navigation app sent us a little wrong, and we ended up in the middle of the Stans Christmas market (yay!). As I poked around a corner, determined to find the train station maps.me was directing us to, a young man asked if we wanted to get in line for a ride. It turned out that, just for this market weekend, the vintage Stanserhorn funiculaire, originally opened in 1893, was open and providing free rides up the mountain, where there were more market buildings. In fact, it was this station that maps.me had sent us to. So we joined the line and hopped the next train, happily taking in the stunning views of the area (of course, I regretted not bringing my camera). 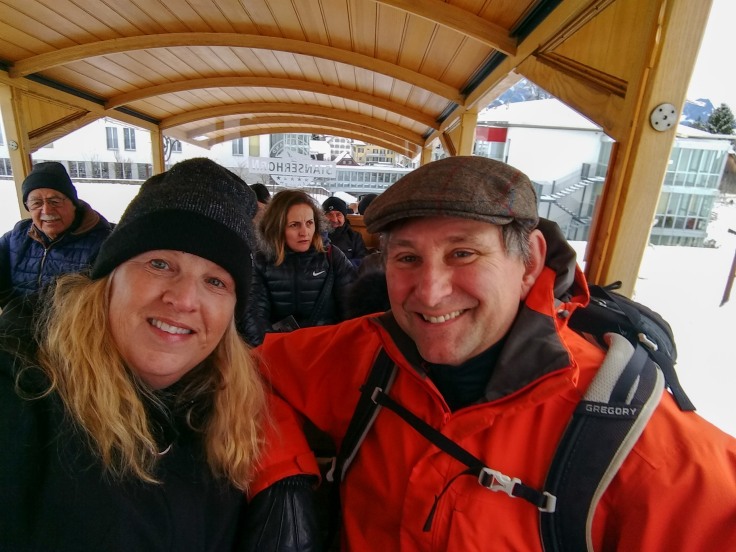 The funiculaire end point is also the starting point of the double-decker CabriO gondola (closed for the winter).

Back down the mountain, we wandered through the market stalls (which snaked, seemingly never ending, down roadways and around buildings) and then crossed over the train tracks to find the real train station. It had a lovely young woman (see above re English!) at the helm, thankfully. She confirmed our proposed purchase of a Swiss Half Fare Card, but we would need to return with our passports to complete the transaction, which we did.