We drove to Luzern, about 20 minutes away, and parked under the Kultur- und Kongresszentrum Luzern (the Culture and Congress Hall, also known as the KKL). Up the escalators and outside we easily found the large archway that was our meeting place for our Free Walking Tour. Our guide was a future secondary school teacher, and hardy. As we waited for the tour to begin, in a breezy 4°C in the shade, my hands freezing inside my newly purchased ski mittens, her bare hands and ankles made me shiver all the more.

Once we started the tour, we were often in the sun and that, along with a brisk walk up the hill to the old city wall, helped to keep us warm.

The Jesuit Church is bright and airy inside. We were lucky enough to catch a brass quartet rehearsing and the tones filled every space. 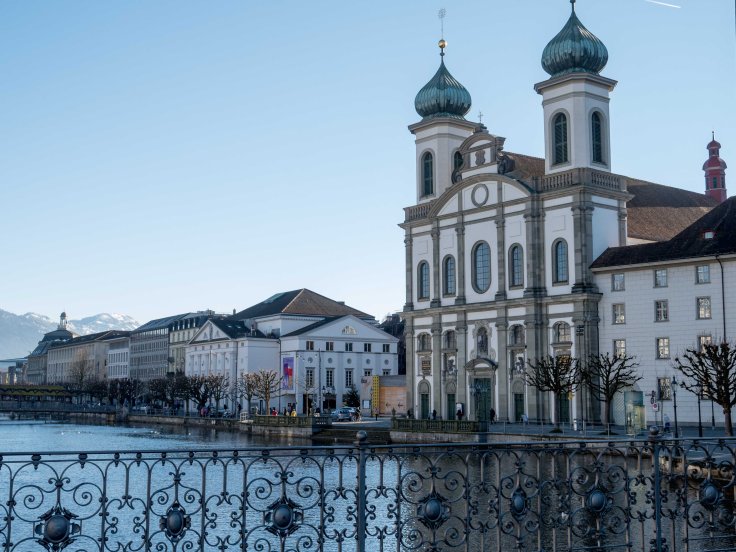 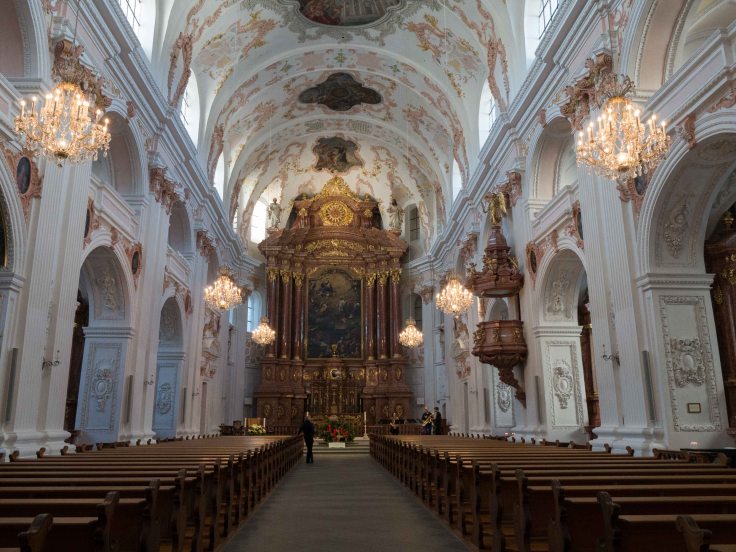 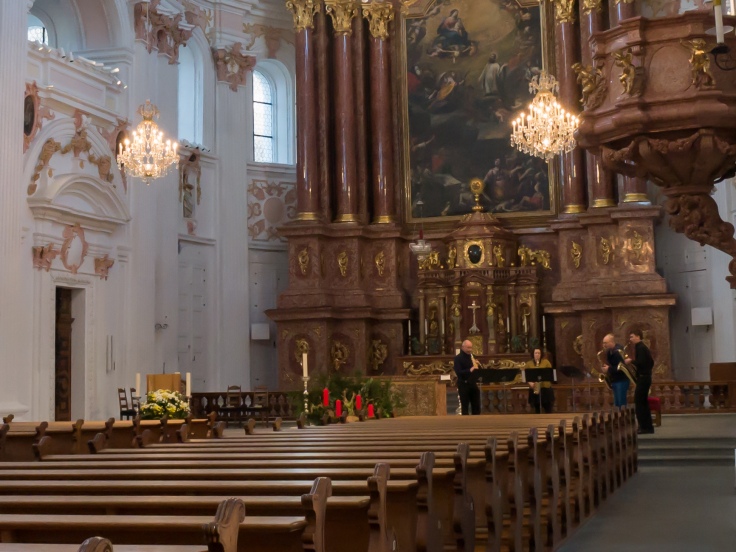 I loved this building, dressed up for the holiday season as an advent calendar. Windows were painted and covered with doors, and each evening a new door is opened to display the artwork. 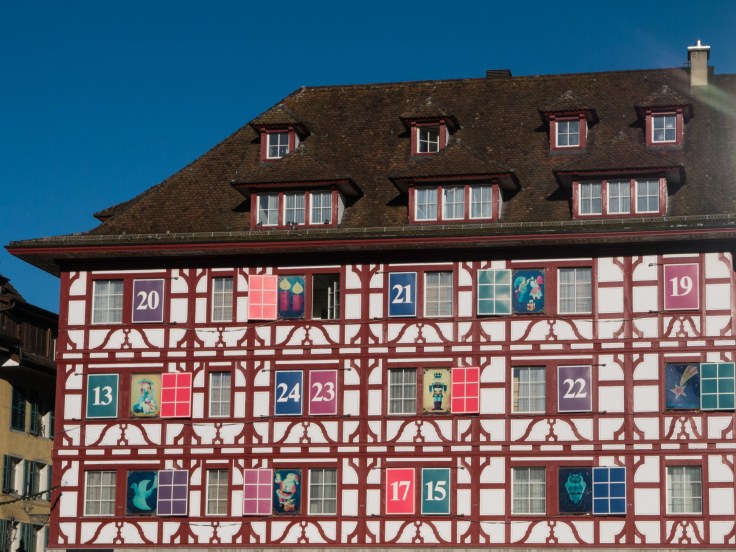 Most of the murals and decorations on the buildings are, according to our guide, there for the purpose of tourism, and are not historic. Even without authenticity, they add a touch of history and visual interest. 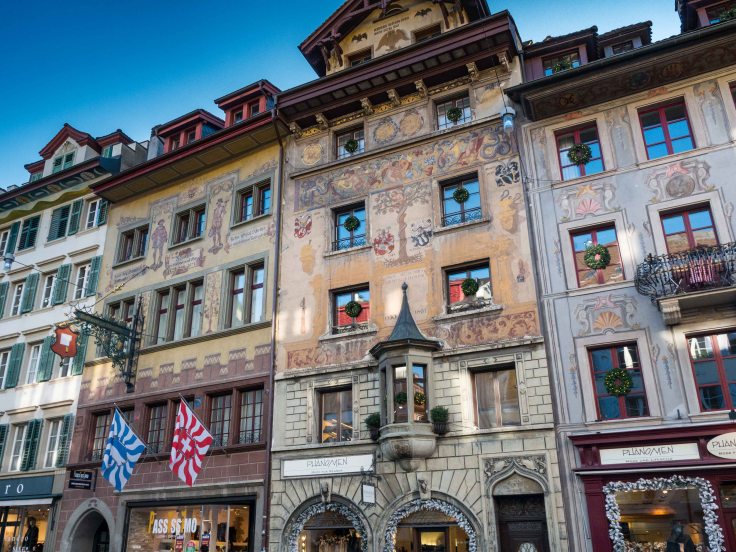 Built in the 14th century as a show of power, the city wall is almost all still intact. We climbed up stairs and roadways to get to one section, which also offered expansive views of the city and lake (though directly into the sun). 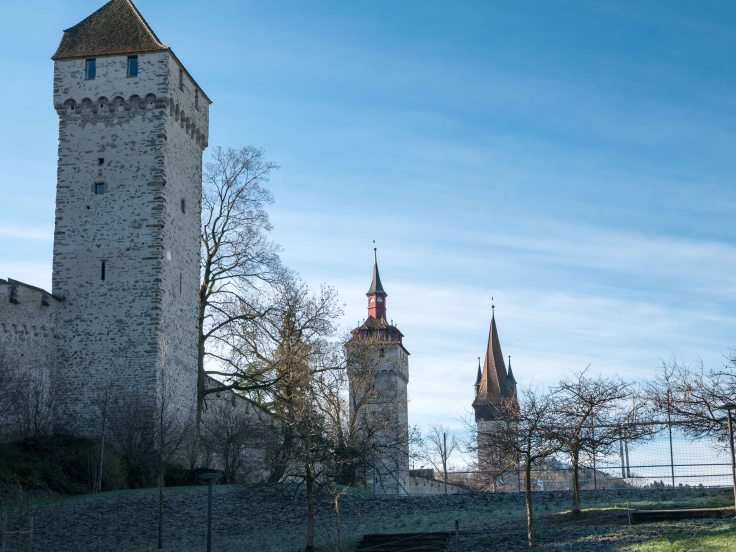 As we wandered the streets on this chilly morning, several patios displayed fur-lined chairs. With the right accroutements, any weather can be patio weather! 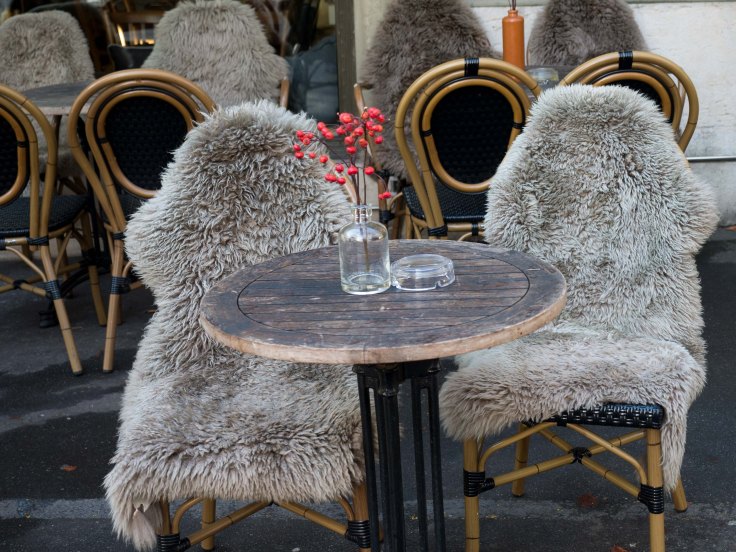 The dying lion, sculpted into a rock face, is a monument to Swiss Guards who were massacred during the French Revolution in 1792. 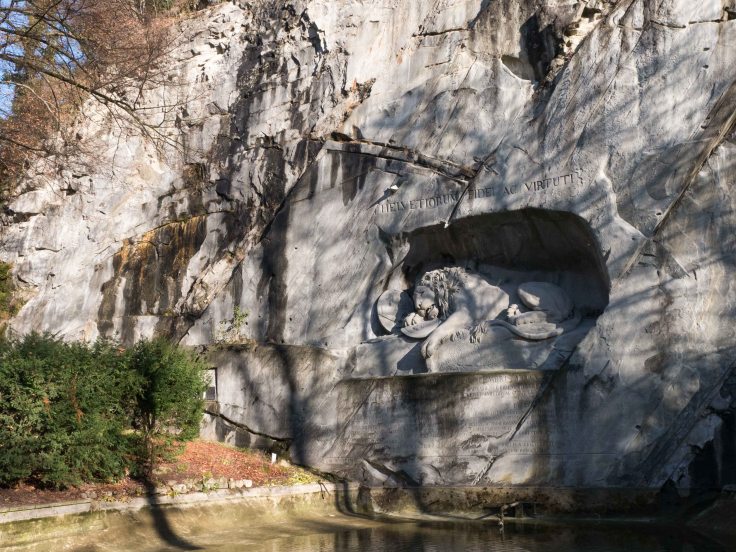 Our tour ended on the steps of this Catholic church. 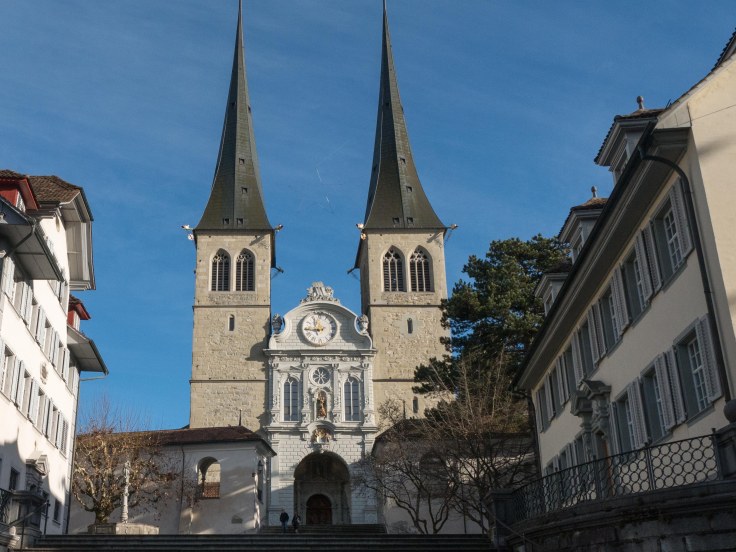 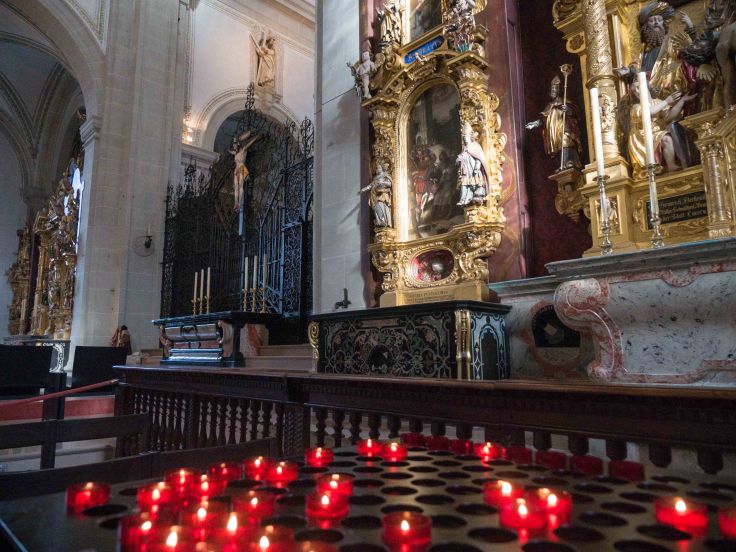 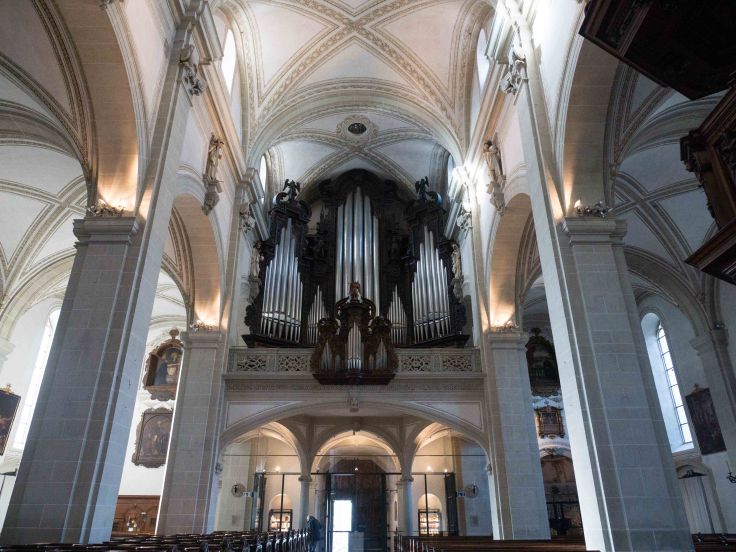 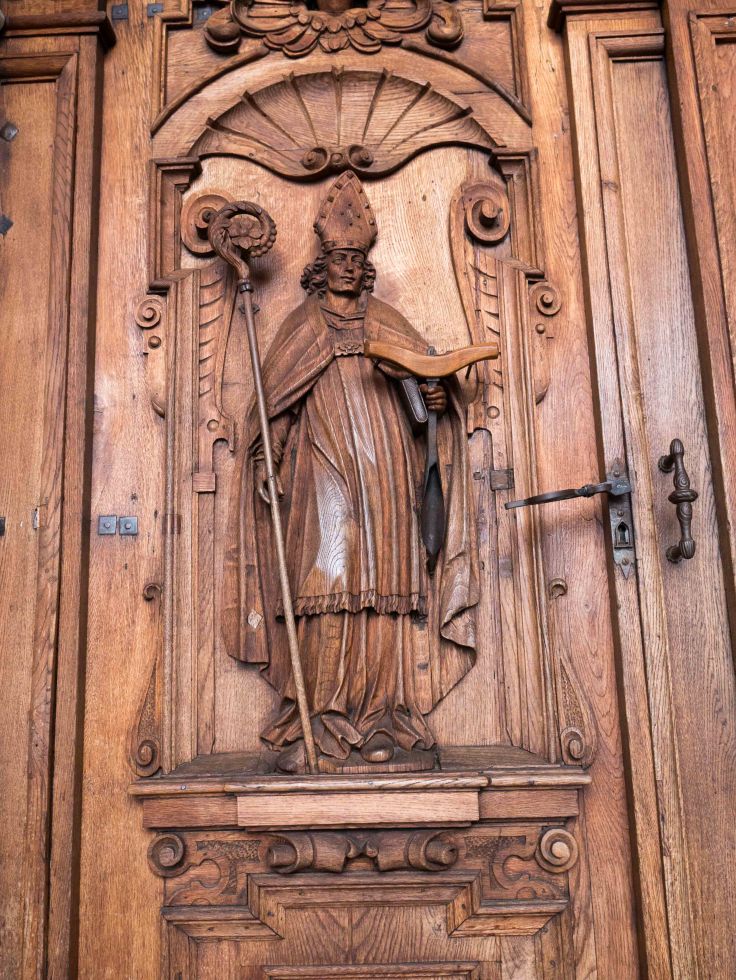 On our own now, Ken and I wandered the streets of the city, now on the opposite side of the lake from where we started. 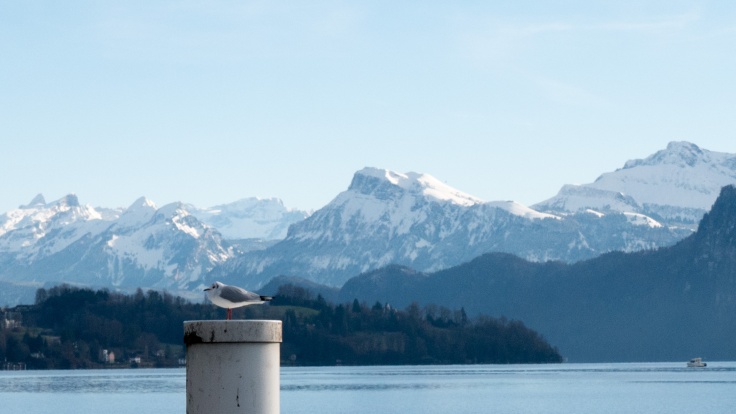 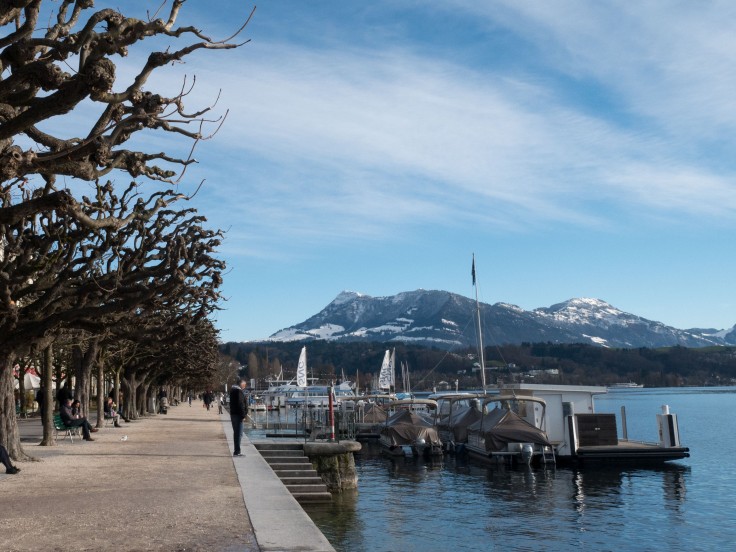 We needed lunch, but just wanted something light and quick. We found just what we were looking for at Twiny Station, where a line-up had gathered. We were served quickly, helped in English and advised what we should order before we had finished interpreting the menu. The recommendations were spot on and the sandwiches very tasty. 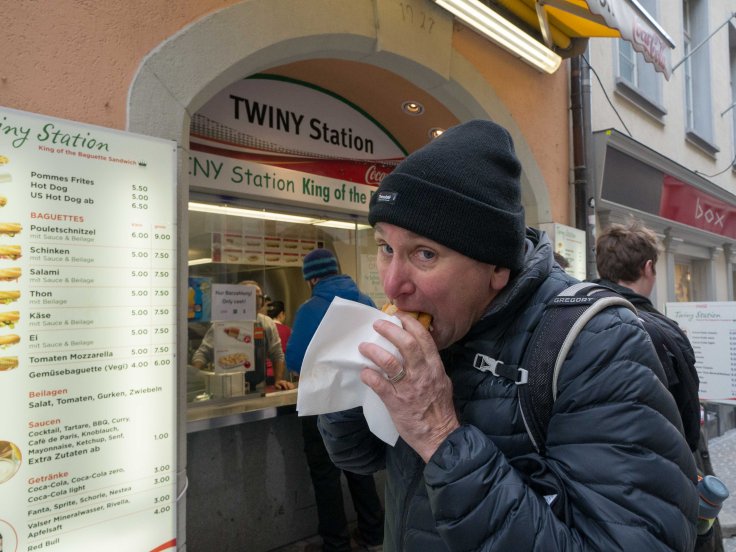 This weir and power generation system are right by one of the old wooden covered pedestrian bridges. The size of this water fountain indicates the amount of electricity being generated at the moment. 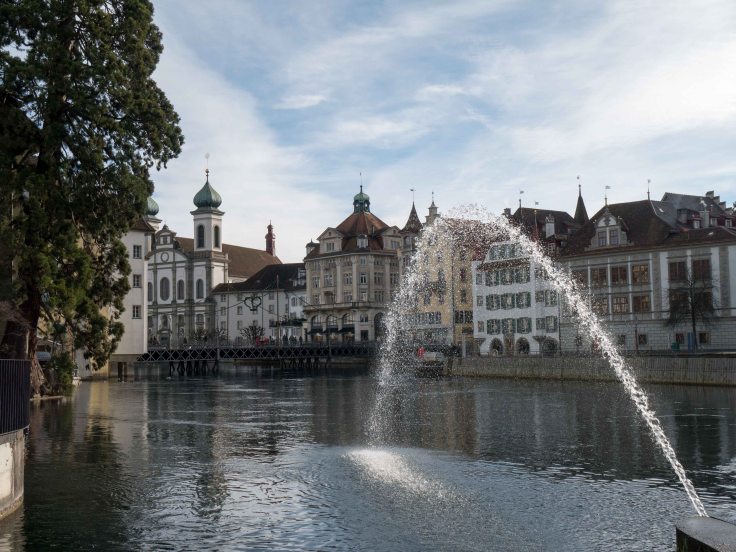 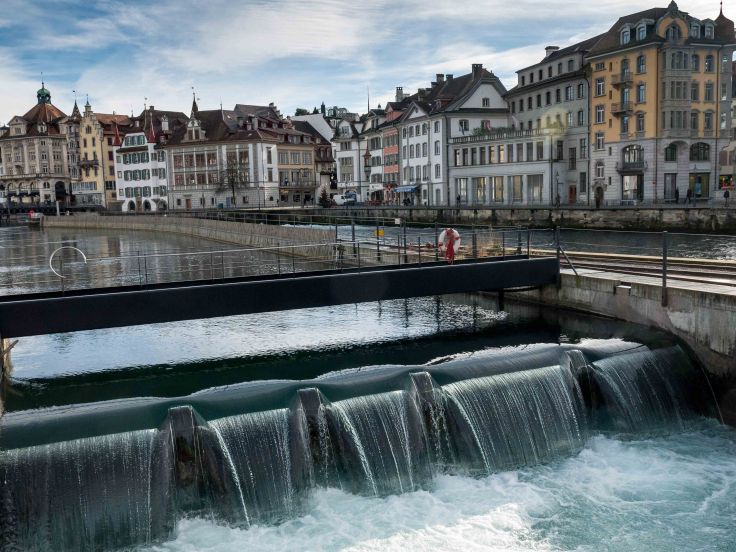 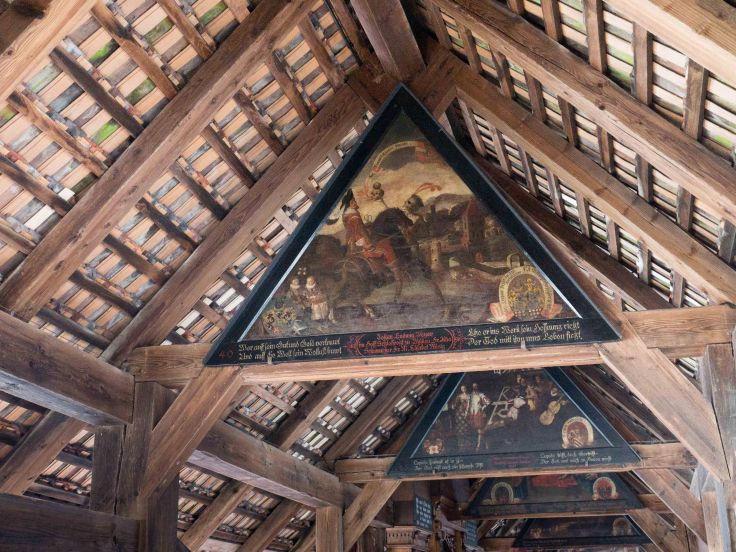 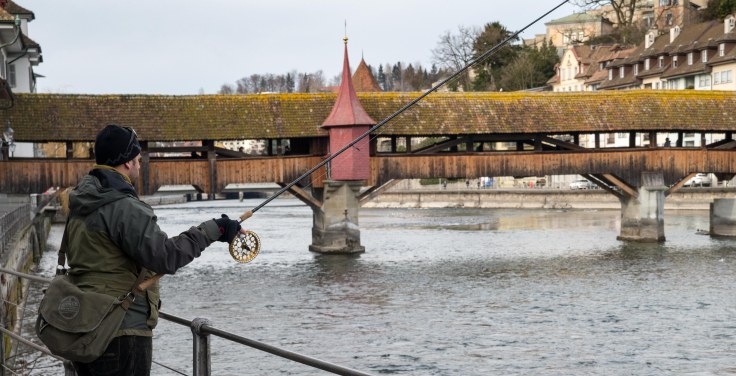 The Kapellbrücke (Chapel Bridge), an iconic image for Lucerne, is the world’s oldest covered wooden bridge. Much of the bridge has been burned and replaced, though a few sections of charred wood remain. 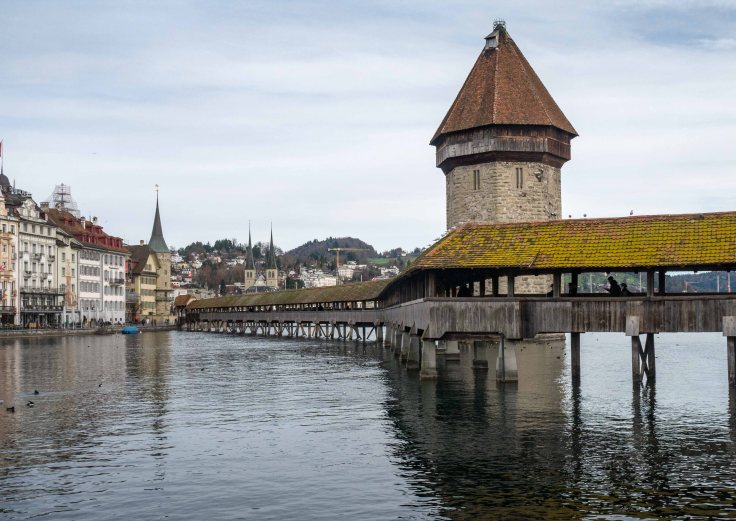 2 thoughts on “Stans: A Walk in Luzern (Lucerne)”