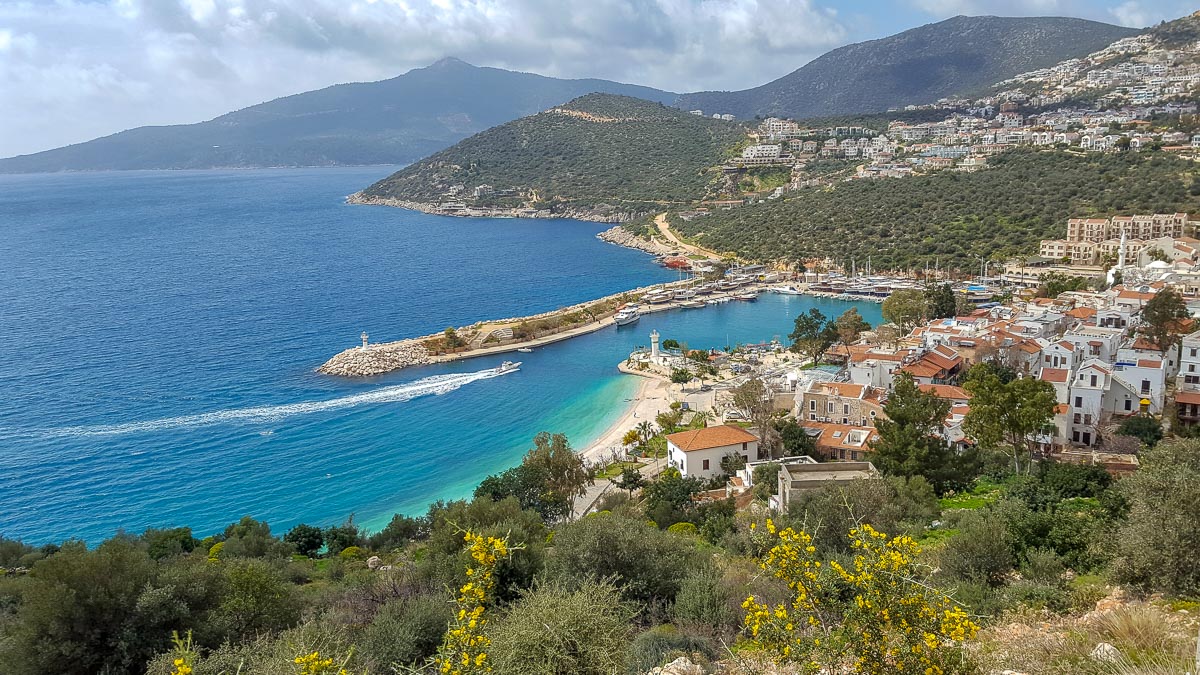 The flight plan was Bologna to Istanbul with three hours to spare before our connecting flight to the Dalaman airport in Turkey’s southwest. Thanks to the remnants of The Beast from the East causing icy-rain conditions on the morning of our departure from Bologna, and the lack of available de-icing fluid at the airport, our departure was about 2 1/2 hours late and, needless to say, we missed our connection.

David and Teresa, homeowners for the house sit we were heading to in Kalkan Turkey, agreed to pick us up at the airport if we were able to catch the early morning flight. Pegasus, the airline we were using, booked us on the early morning flight, put us up at a hotel next to the airport (the hotel provided shuttle service there and back, sandwiches delivered to our door at about 11:30 pm, just as we were nodding off to sleep, and an unexpected wakeup call at 3:30 am to get us up in time to catch the return shuttle), and ensured our luggage, which didn’t join us at the hotel, made it onto the same flight as we did.

Our hosts drove us around their village and up into the mountain, introducing us to our first Lycian tomb  (ancient square room-like tombs carved into the rock), and treating us to a wonderful Turkish feast at a hillside cafe (we returned the favour at lunch the next day). 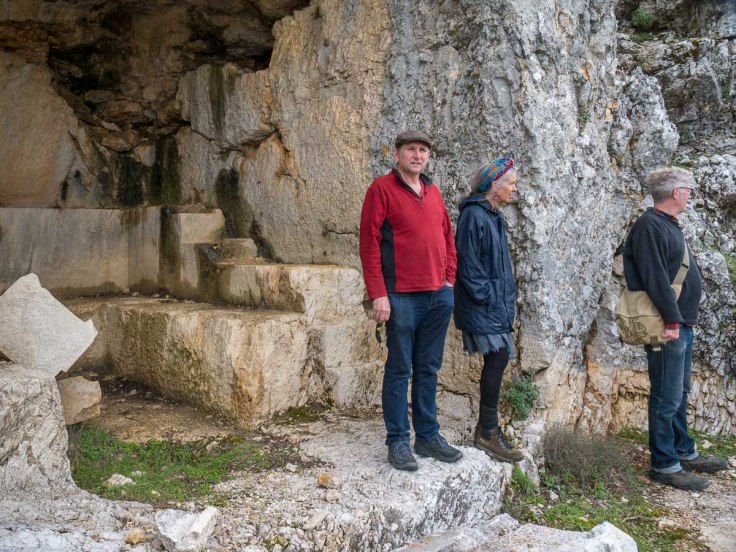 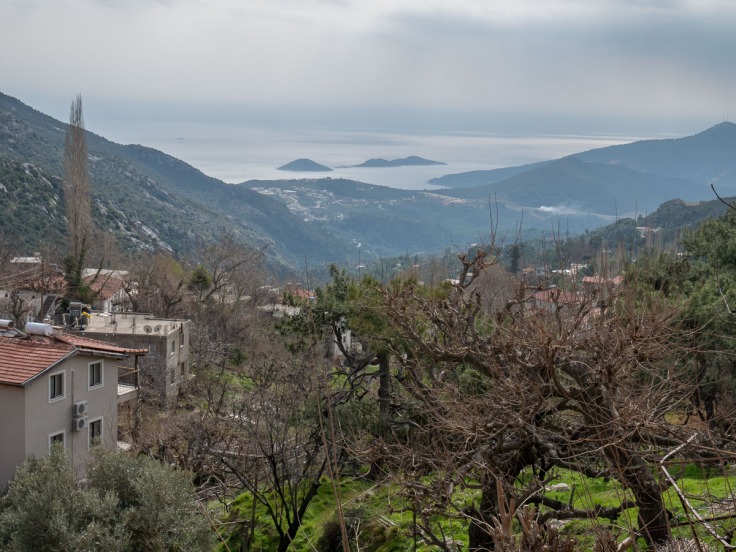 Since we wouldn’t have their car (they rent and don’t pay for it when they are away), they made sure we knew how to walk into town from their resort accommodation, took us to a nearby market where we purchased wonderful produce, gave us a chance to purchase and drive heavy groceries back to their villa, got us to the TurkCell shop to pick up a local SIM card, and bought some baclava, which we consumed with tea while sitting on one of the many decks near the water at their resort.

Once our hosts headed off on their holiday (ironically, taking the reverse of our route to Istanbul and onto Bologna, and then further by train to visit their daughter in Florence), we were left with their two beautiful Siberian Forest cats for company. 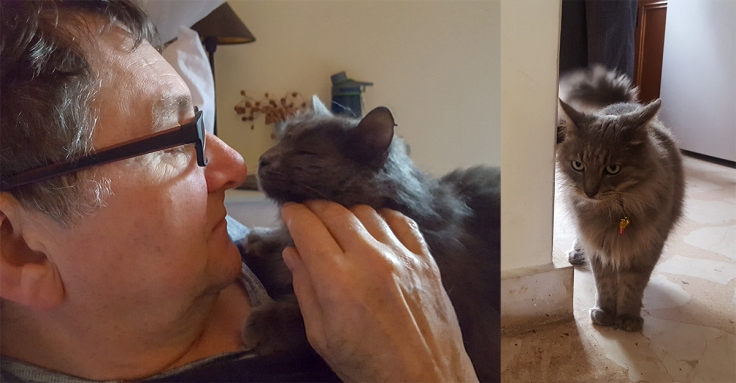 Though their home is in a resort community of about 250 villas, a 60-room hotel, 3 pools, bars and restaurants, we felt like we were the only folks around. The hotel, bars, and restaurants were closed, the pools empty.

Our resort, Patara Prince, is across the bay from the little village of Kalkan. On both sides of the bay, everything is a hike up or down, on stairs or steep roads. We walked into town several times to pick up groceries, visit the market, and for the occasional meal. 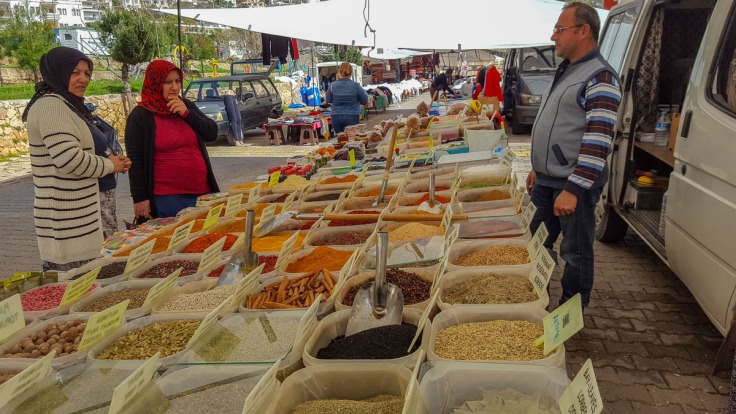 Many restaurants and bars were closed, but there were signs everywhere of preparations for the season–new restaurants being built where old ones had closed, shops being spruced up, potholes being filled, and dry-docked boats being refreshed.

Ken went exploring on one of my workdays and finally found the markers for the Lycian Way, a 540km hiking trail that follows the coast past this village. The red and white lines were easy to miss in some places, and he didn’t find the entry marker to the trail until he was on his way back down. The full trail is estimated to take 29 days. 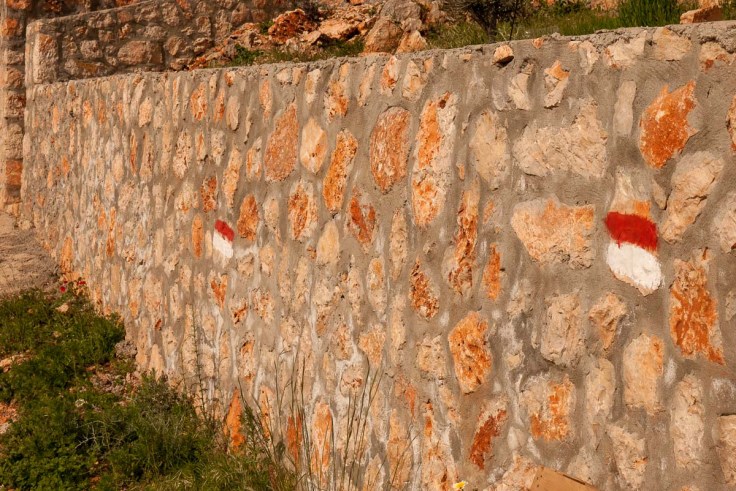 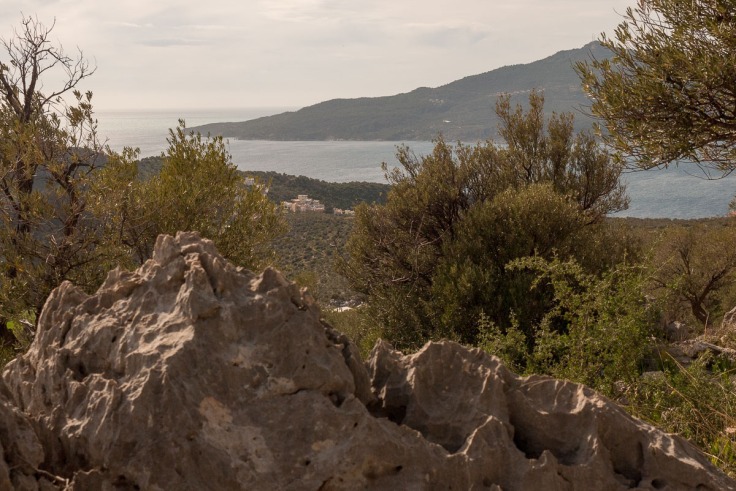 We rented a car for the weekend so we could get out of our little village and explore. Though we could have taken buses, we like the idea of being able to stop where we want to stop, and to explore nooks and crannies along the smaller roads rather than just the main highways frequented by buses.

Kaş is the next main village to the east of Kalkan. It is much larger (though with Wikipedia being blocked in Turkey, I’m not sure how much!), and the drive to it is stunning. Except in one section where the coastal road is being worked on, the entire trip is on roads that hug the coastline, zigzagging around coves and inlets. 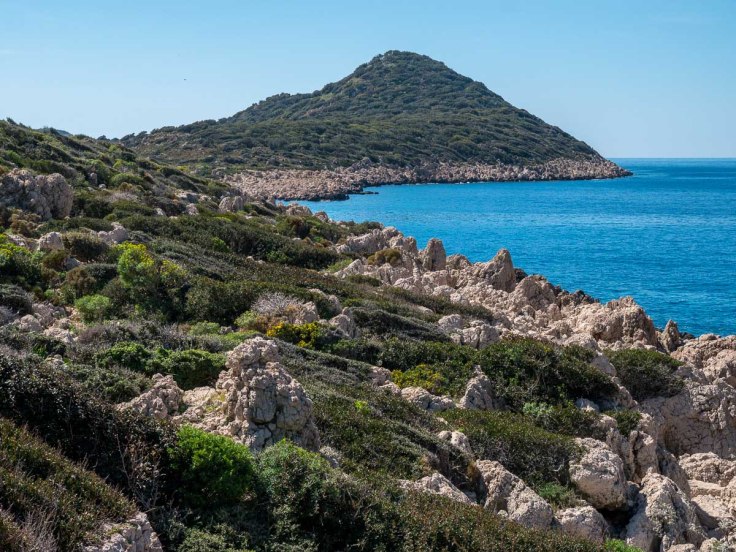 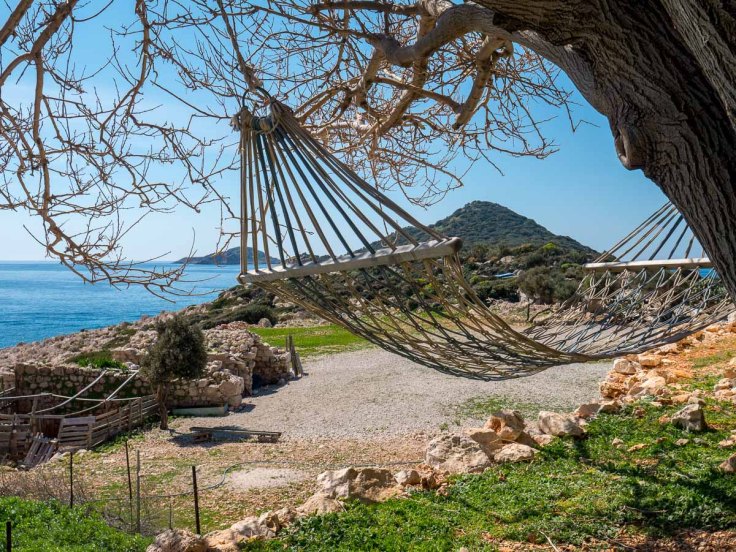 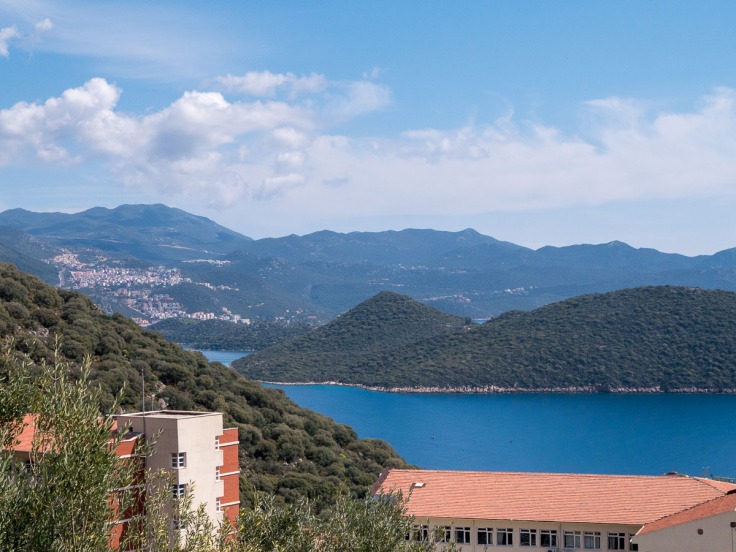 One of these coves is the popular Kaputas Beach. It was easy to spot as we rounded the corner since every tour bus and car seems to pull over for passengers to ogle, if not to walk the many steps down to the beach. We could see stacks of lounge chairs and what appeared to be a new bathroom building being constructed, but little swimming at this sandy spot. 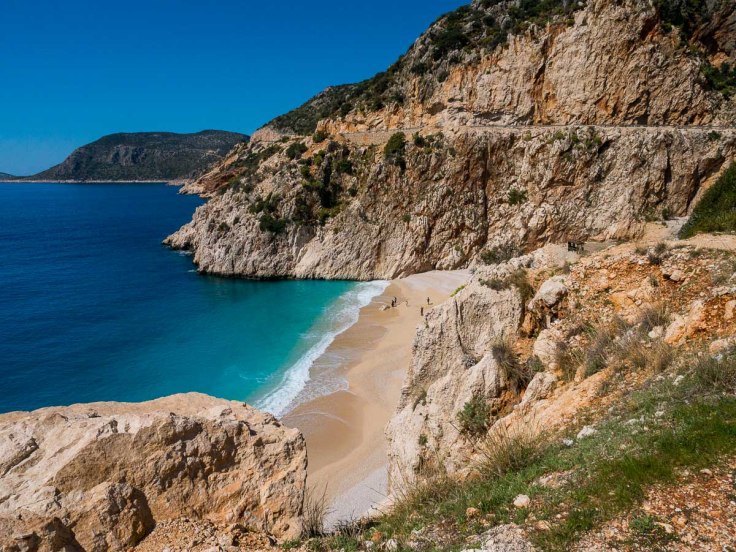 The town square, on the Kaş seashore, was quite lively on the sunny March Saturday that we visited. Kids tossed balls and rode skateboards around, while parents and tourists chatted and drank coffee and tea on the many restaurant patios. In season, paragliding and scuba diving are popular activities here. For avid wreck divers, there are at least 6 vessels submerged nearby. 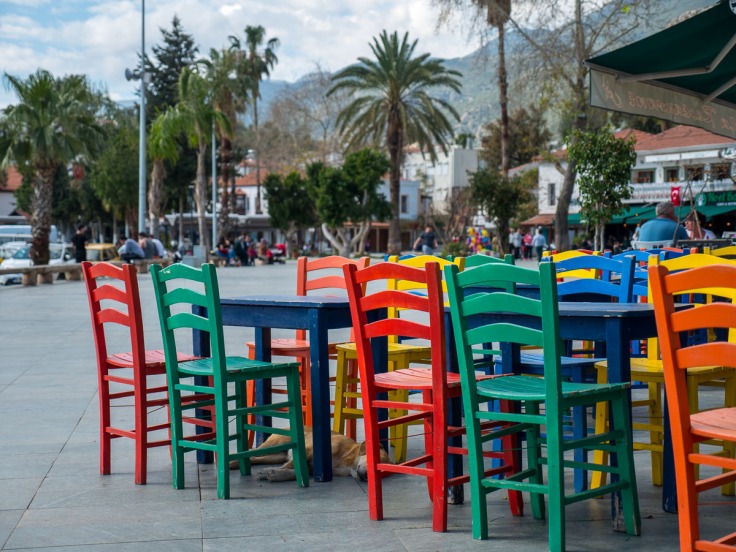 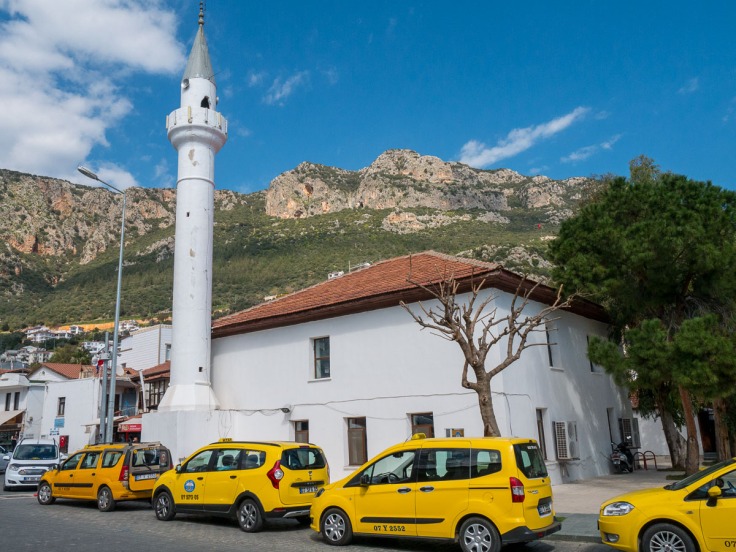 A few minutes from the square is the Antiphellos amphitheatre, which offers great views of the city, mountains, and sea. 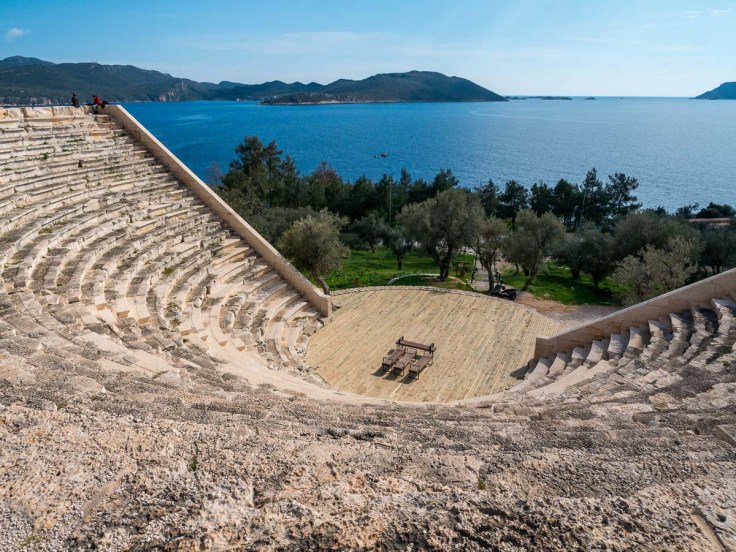 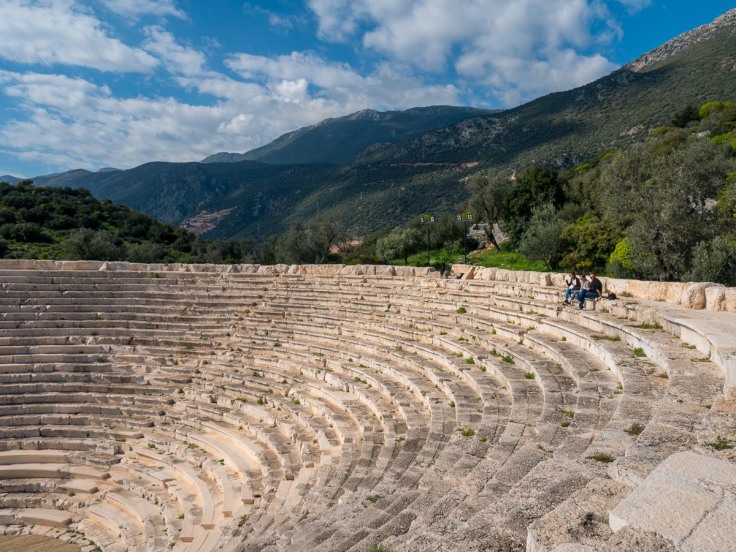 In the hills just above the village is a great example of a Lycian tomb, with its traditional carved facia still reasonably intact. 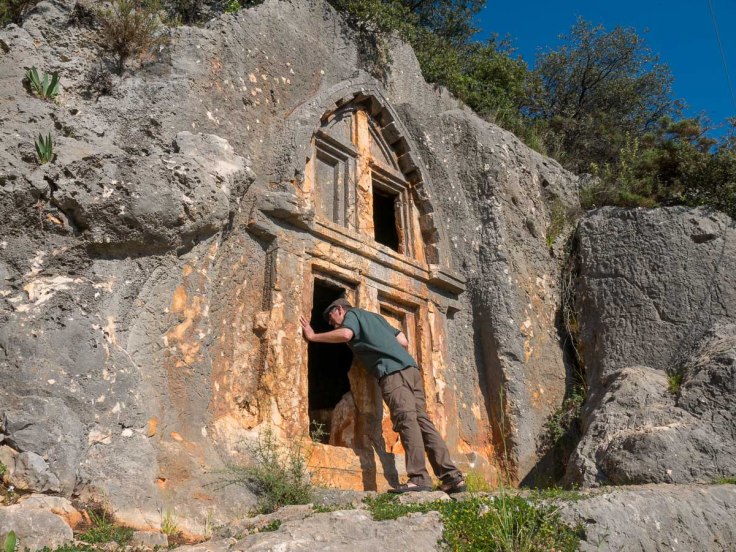 Kaş sits at the base of a hilly peninsula that stretches into the Mediterranean Sea. A single road allowed us to drive out the length of the peninsula and loop around the last hill, which offered another gorgeous view of the sea and surrounding islands. 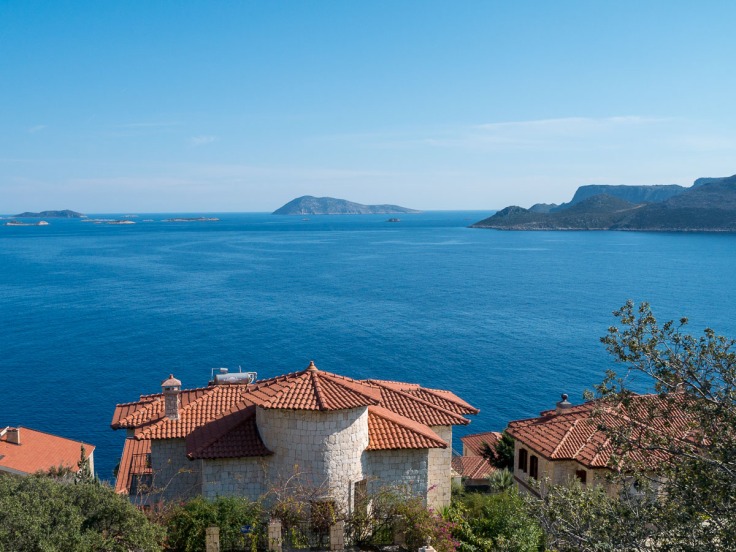 On the second and last rental car day, we headed west from Kalkan with plans to visit the ruins of Xanthos and then on to what promised to be a beautiful sandy beach.

Xanthos is part of the Xanthos-Letoon UNESCO World Heritage Site. The valley below Xanthos is a sea of plastic greenhouse tunnels hiding the crops within. The air above the polytunnels is grey and thick, probably from the constant burning of prunings, field clearing and other waste. Walking among the Lycian ruins, it’s hard not to consider the valley as it possibly once was, green and clear. When the call to prayer begins, it adds a haunting overtone to the ancient rocks and grey landscape. 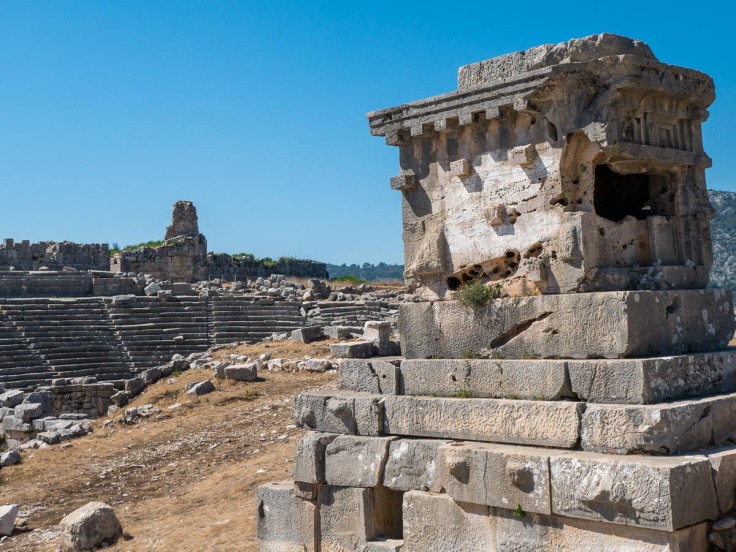 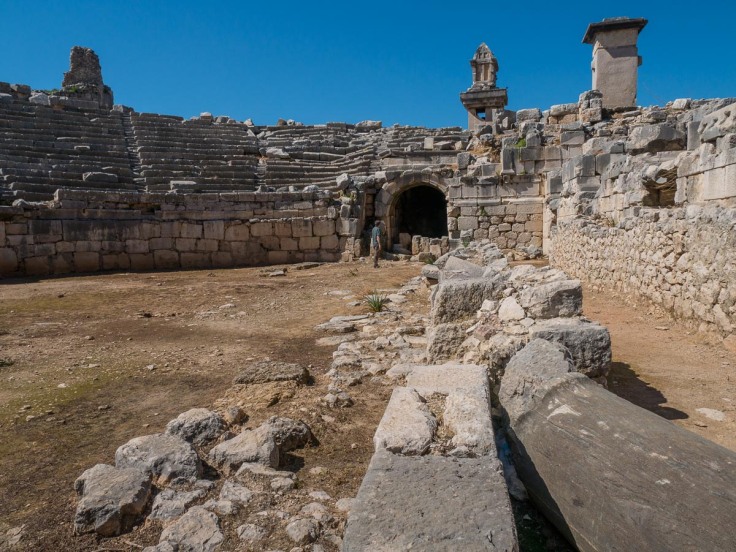 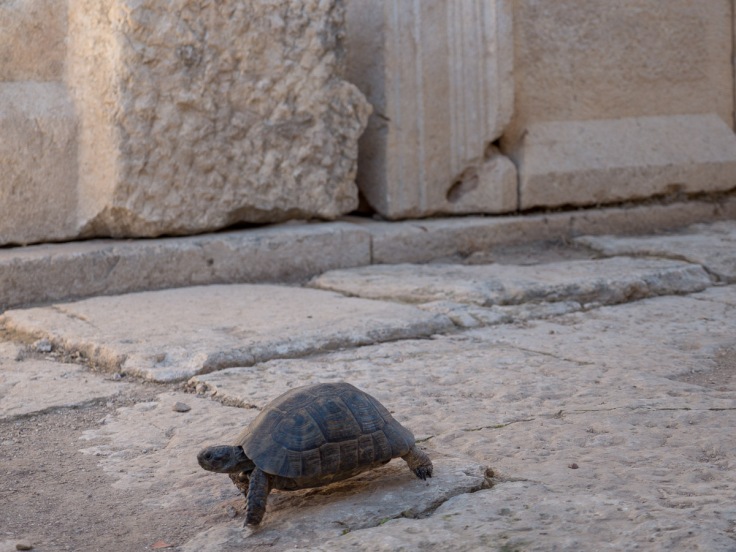 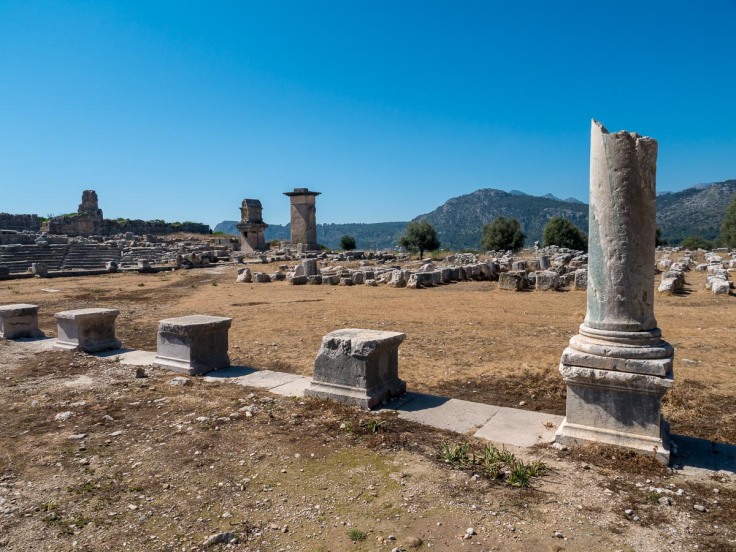 From Xanthos, we made the drive to the beach, surprised to find a gate across the road and a pay station. We were asked if we were planning to visit the ruins or just the beach. “Ruins?” I thought to myself. We had no idea there were ruins to be seen. After paying our fee to visit only the beach, we drove through the gate and soon we understood. We looked out at what could have simply been agricultural fields, but they were dotted everywhere with excavated artifacts. This area had once been a wealthy port city. Much of it is buried beneath sands; excavation is ongoing. 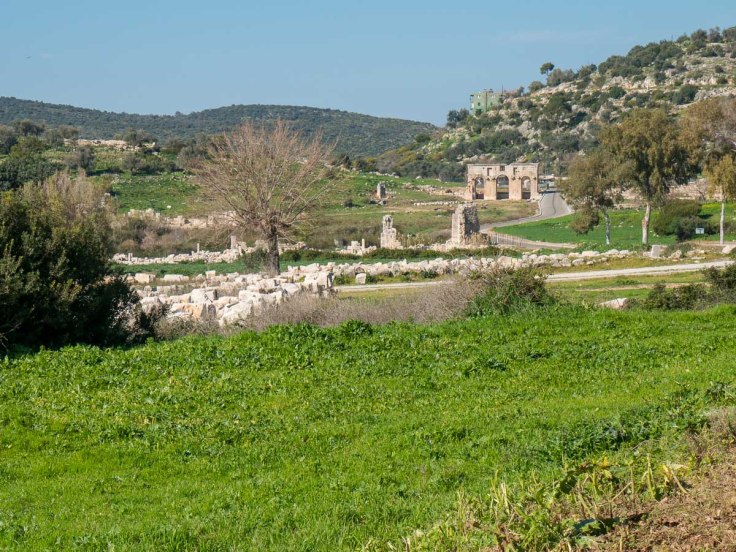 Driving past the fields of history, we arrived at the end of the road, which morphed into a haphazard parking area. A boardwalk led to the beach, a stunning 12km (or 20km depending on your source) stretch of beautiful fine sand backed by hills and rocky outcroppings. 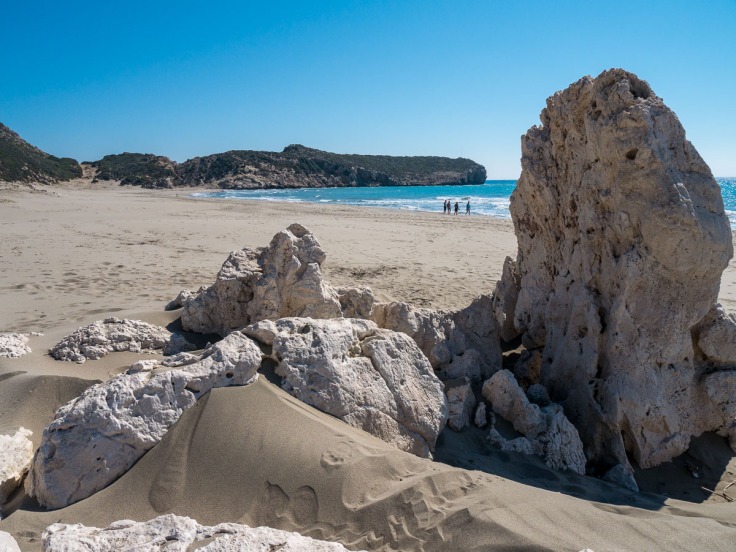 One thought on “Kalkan: Our first taste of Turkey”