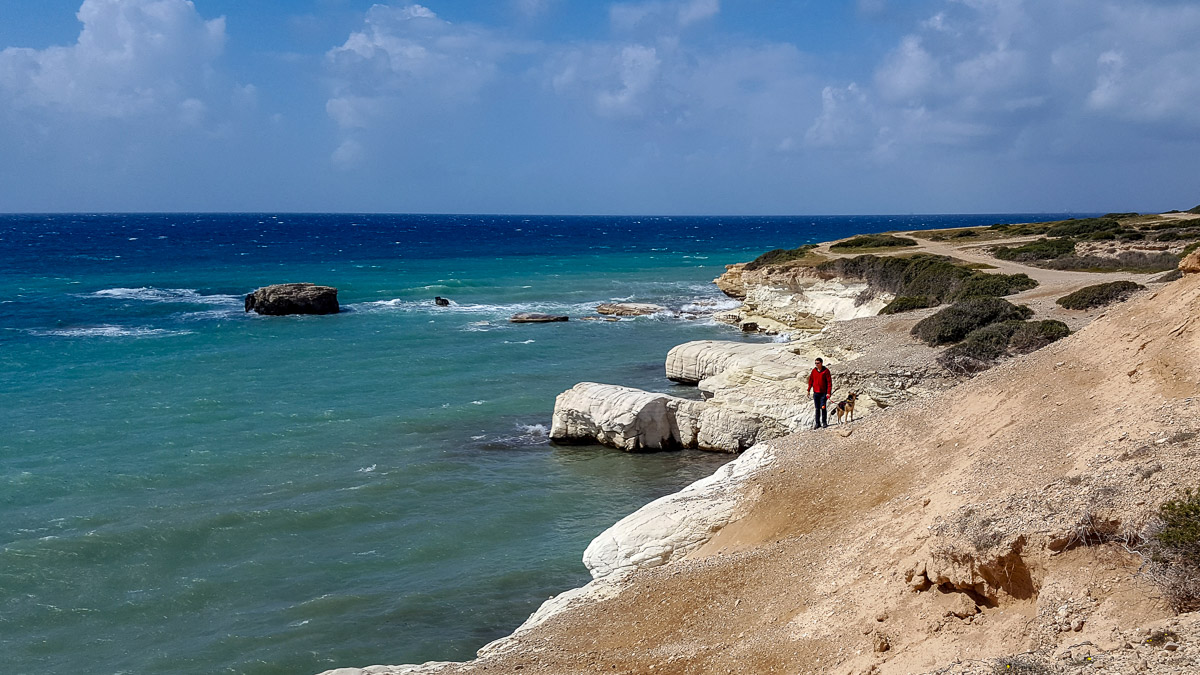 While planning what to do after our house sit in Kalkan, Turkey, we found a 2-week house sit in Cyprus. An island just south of Turkey, Cyprus appeared to be a really convenient next stop as it is an island nation just south of Turkey. As we always do before applying for a sit, we did a quick transport check and found that we could fly from an airport near Kalkan to an airport on Cyprus quite cheaply and quickly.

After a little more research as we prepared for our house sit interview, we discovered that getting to Cyprus, specifically the south of Cyprus, would be more challenging. Cyprus has been the subject of territorial disputes and is currently a divided nation with the northern part under Turkish rule (though not internationally recognized as such). Nicosia, the capital city of Cyprus, carries the tagline of the last divided capital city in Europe.

Though we could have flown very quickly and cheaply from the Dalaman airport near our Turkey house sit into the Ercan airport in the Turkish part of Cyprus, it can be quite complicated and costly (for taxi fares from the airport through the border) to cross into the south. Instead, we meandered up the west coast of Turkey visiting Bodrum and Istanbul, and then flew from Istanbul to the Larkana airport in the south side of Cyprus with a quick stop in Athens, Greece. A little out of the way, a titch more expensive and time consuming, but a whole lot less stressful.

And now, here we are in Cyprus, hanging out in a 4-bedroom, 4-bathroom attached house on the hill with a stunning view out to the Mediterranean Sea. 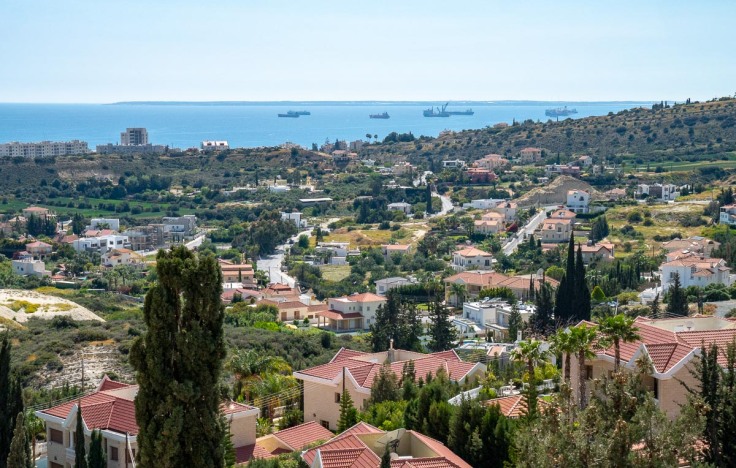 We are accompanied by Tia, a German Shepherd cross, who takes us to a protected seaside area every day for a long walk, and for several other short walks around our home. 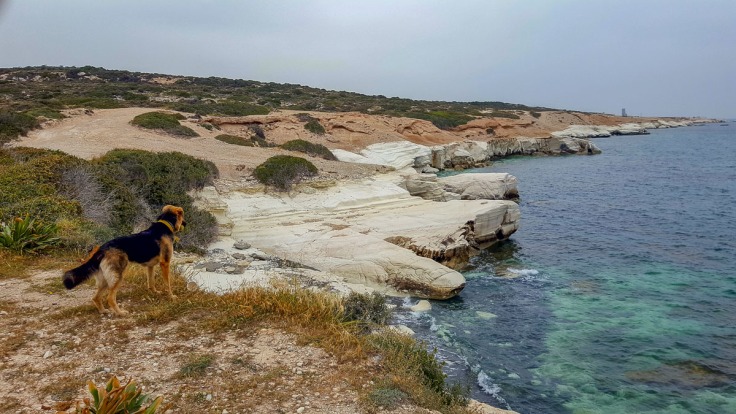 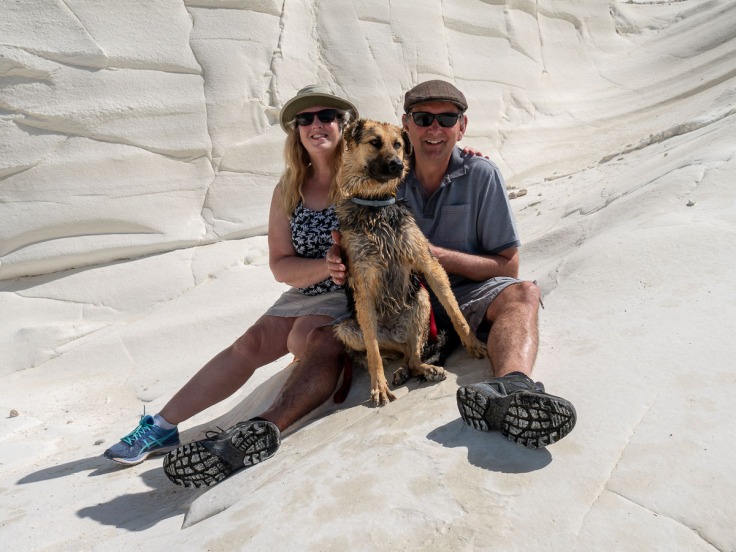 English is prevalent here in Cyprus, with almost all signage offered in Greek and English, and almost everyone you run into having basic English at the very least, with many being fluent. Past British rule, a large expat population, the importance of the tourist industry, and school study all influence the level of English in use. As a visitor, it is easy to get along here with no Greek knowledge at all.

We drove the 10 or so minutes and parked in one of the many almost-full public seaside parking lots (€2/3 hours). Limassol has a lovely long coastal promenade and park spotted with cafes, sculptures, play areas, and a variety of piers, several of which are big enough to hold a large party on. 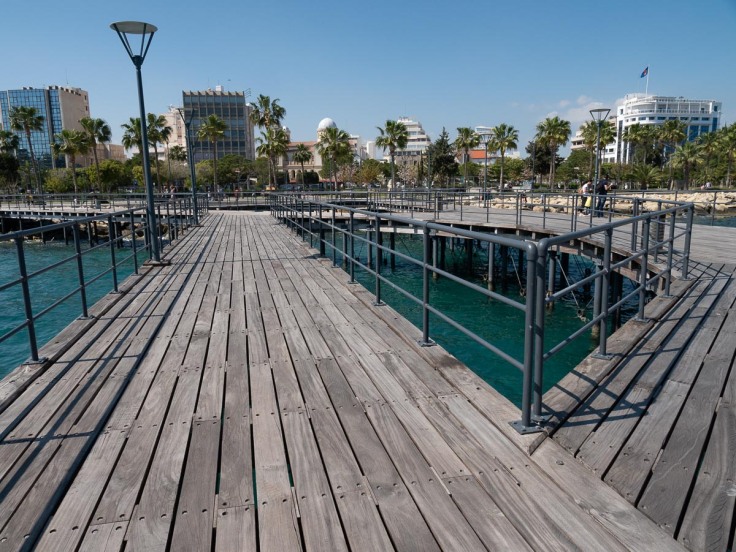 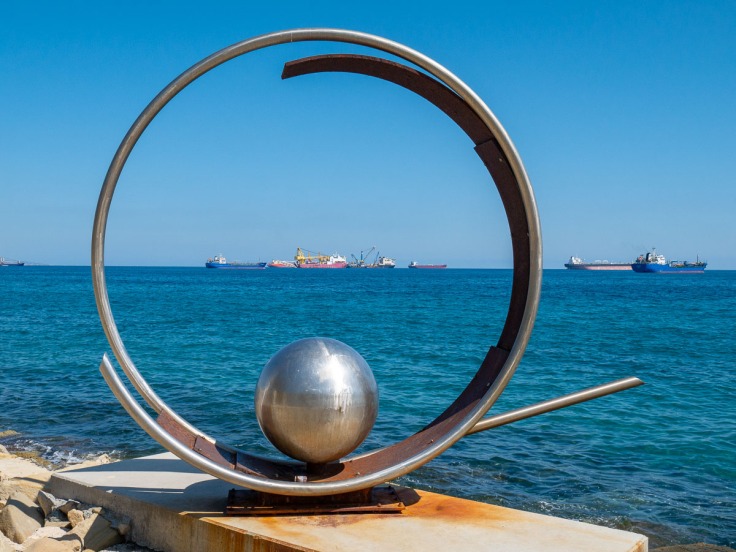 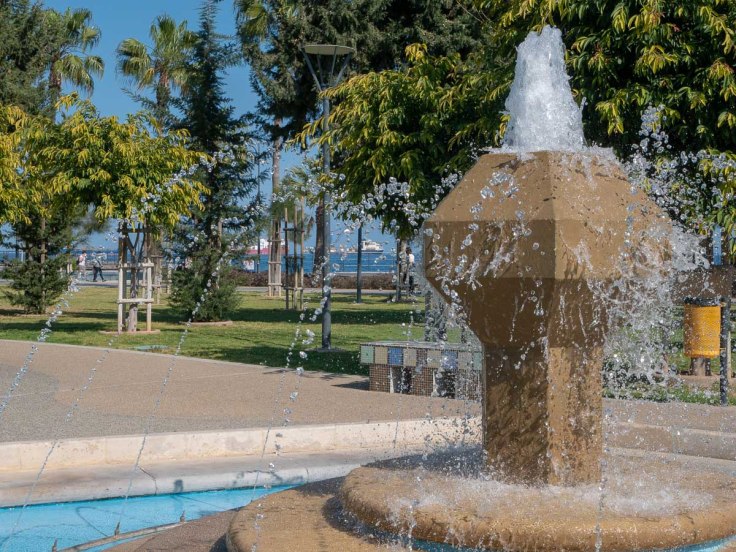 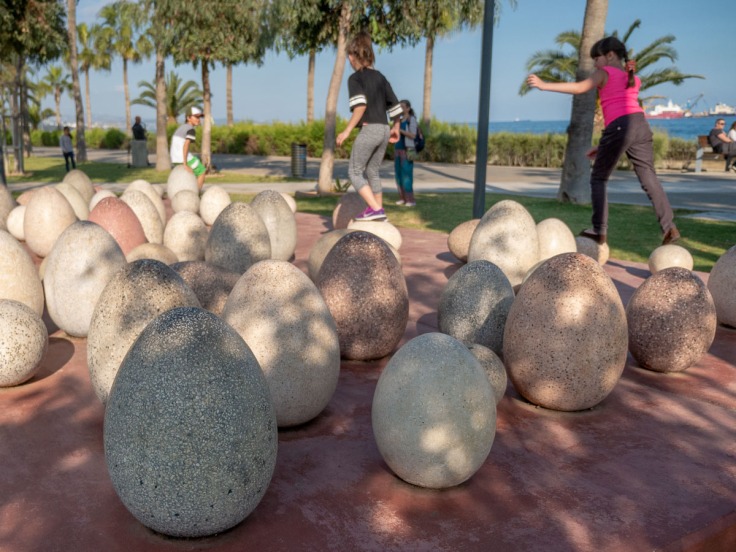 The promenade leads to a marina framed by boxy glass buildings partially supported by columns so they seem to float above the pier. These are mostly home to restaurants. 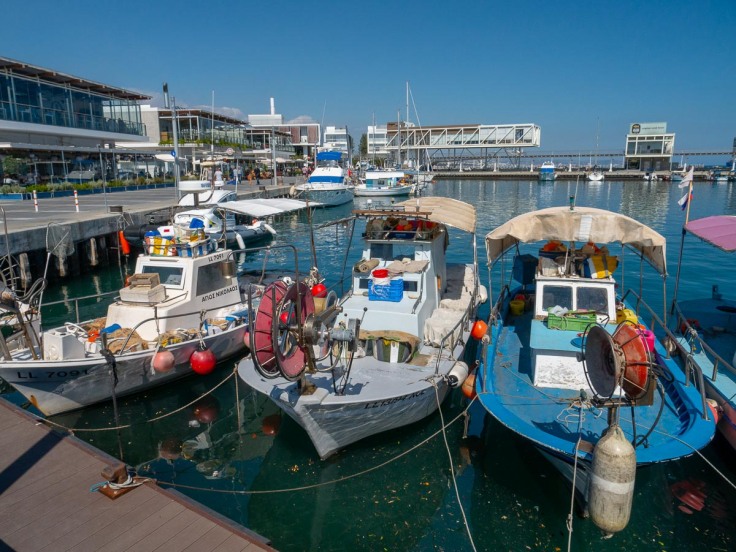 We walked away from the water into old Limassol and found the Limassol Castle, now a museum, surrounded by narrow streets with shops and restaurants. Farther away, there appeared to be more restaurants and shops, but most were closed up tight on this Saturday, mid-day. Another area appeared to be completely abandoned with almost every surface covered in graffiti, some of it quite beautiful. 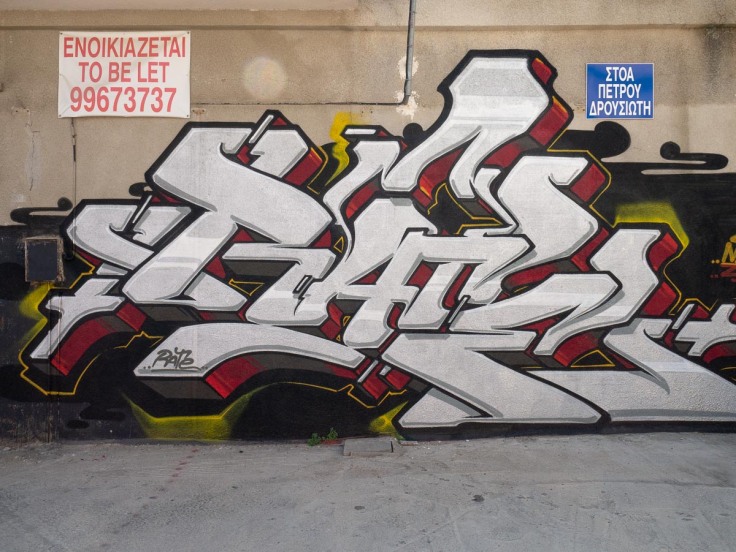 The highest peak on Cyprus, Mount Olympus in the Troodos range, is about an hour’s drive inland from where we were staying on the outskirts of Limassol. Along the drive into the mountains were many signs inviting passers-by to come in for a wine tasting–we’ve added that to our plan for another day.

We came across an odd landscape with rock faces that glinted silvery in the sun. An interpretive sign explained that we were looking at an old asbestos mine in the process of being reclaimed. 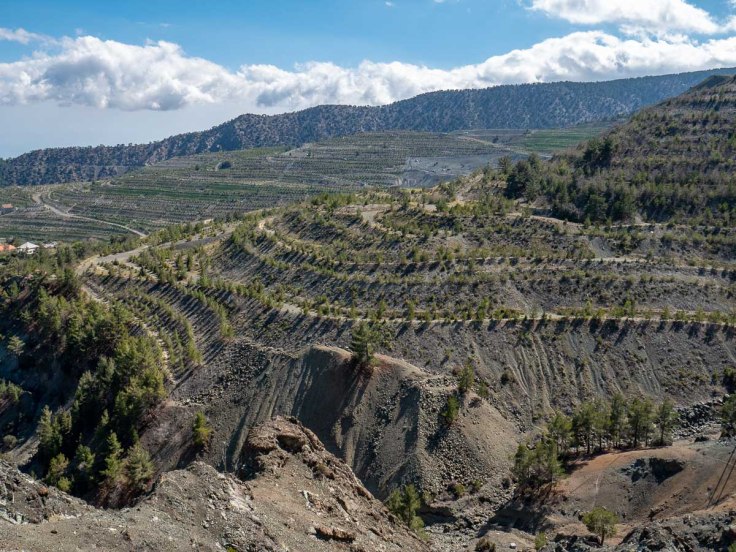 We were aiming for lunch at the Village Pub, a restaurant (rather than a pub) in Kakopetria recommended by our homeowner as having perfect food (who could pass that up?). Sadly, the restaurant was closed with the owner, we found out from a neighbouring restaurateur, flitting off to France for the Easter holidays. Oh, well, it was a great way to get us into the little village and we still enjoyed a reasonable meze–in Cyprus meze refers to a compound meal that includes a meat or fish main and many side dishes and sauces. (In Turkey, meze referred to each of the little side dishes which you ordered individually.) 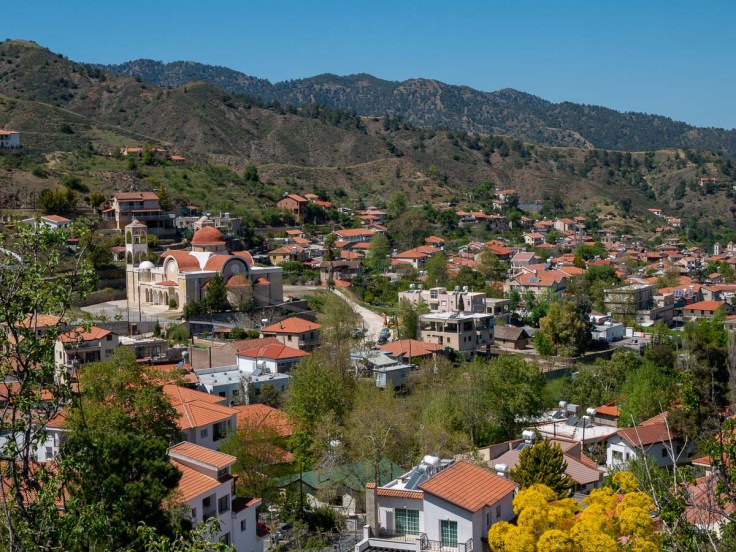 From the village, we headed back toward the peak of Mount Olympus. We got as far as a ski hut (no snow at all at the beginning of April) but could drive no further as the top is a protected military zone (for communications equipment, it appears). It might be possible to hike and climb, but that wasn’t in our plans for this day.

We drove west past Paphos to Coral Bay, a popular tourist resort area. We parked and looked over the edge to the bay below, and I had a hand-smacking-my-forehead moment. Why didn’t we think to pack bathing suits and towels? Though swimmers were rare at other beaches still (the water is a bit cool yet), there were plenty here in this shallow, protected bay.

There was an ice cream truck in the parking lot, lounge chairs and umbrellas on the beach, and some fun water-activity rentals floating about (for example, a personal paddle dock complete with water slide), but other than that nothing was open. Most importantly, there was no place to order a margarita! (We had managed to find a margarita on another quick beach hangout, so we’re not complaining too much.)

After a walk along the beach, we sat on a couple of the free lounge chairs to enjoy the ambiance. There was a sign as we approached the beach indicating that two chairs and an umbrella cost €7.50 and, soon enough, a fellow came by to collect, affixing a red sticker to our umbrella to indicate payment. (So that’s the trick–try to score an empty set before the red sticker is removed!)

The ice cream truck served up their version of an iced cappuccino, which was enormous and loaded with soft ice cream. Not a margarita and a bit over the top, but with our icy cups in one hand, our Kobos in the other, an umbrella keeping us partially shaded, we nestled in to enjoy the warmth of a lovely day at the beach.

It’s a mostly working week for me coming up, and then we head off to our next location on Friday. If we do anything interesting, I’ll write a new post. Otherwise, just assume we are basking in the sun, loving the views, playing with Tia, and hanging around on sandy beaches. 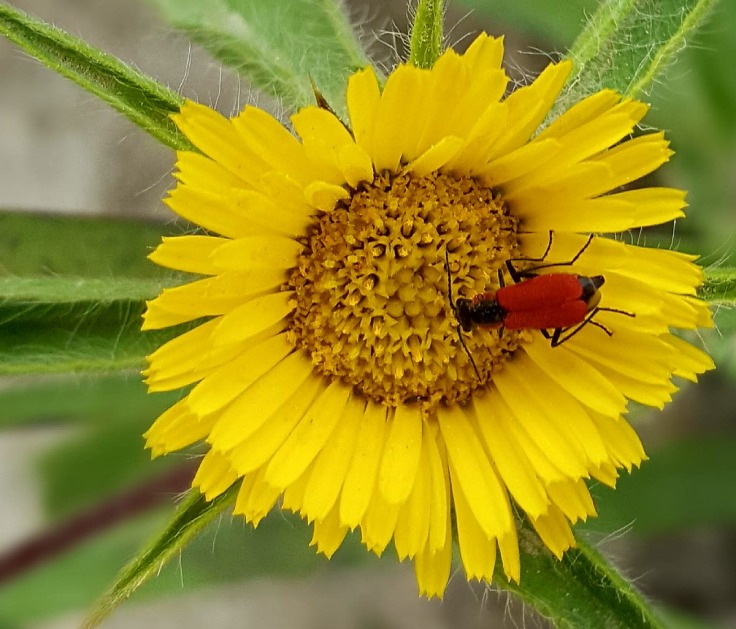 One thought on “Limassol: First (and last?) impressions”