I thought I had finished talking about Limassol and Cyprus, but we created enough time in a few workdays by rescheduling our dog walks to Ken-only afternoons to get up to a few more interesting things in our last days there.

Though we felt like we had seen sufficient ancient ruins to last us at least a few years, our host suggested that a Kourion visit was a must-do. Only a half-hour drive from home, we followed Google Maps to Ancient Kourion. We knew we hadn’t quite got it right, when we arrived at only one fenced site, but were quite happy we had gone a bit astray. The remains of this 6th Century Christian beach-front basilica were beautiful against the dramatic layers of the cliffs behind them. 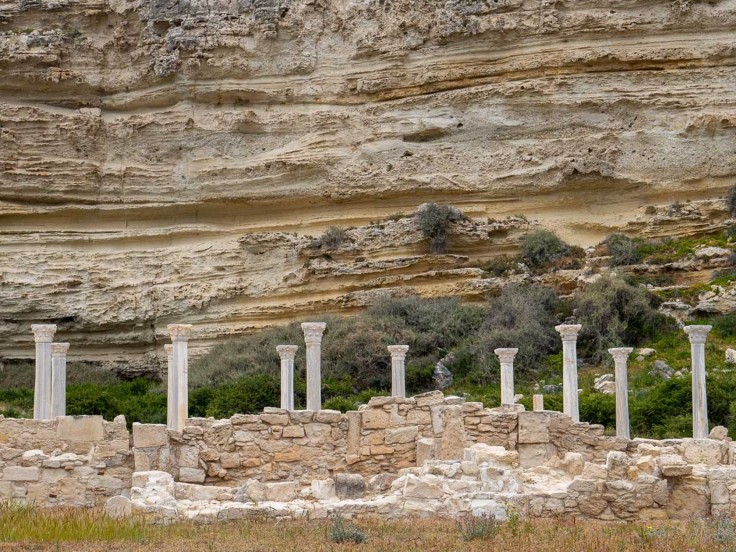 A little backtracking and sign-following got us up to the top of the cliff above the basilica and into the Kourion grounds. Part of the UNESCO World Heritage Site of Paphos, the Cyprus Department of Antiquity has done a really nice job of enhancing the site of these ruins. Imposing arched translucent rooves cover some of the more delicate mosaic floors, and walkways allow visitors to get out into and over the excavations without causing damage. Green spaces and blossoming gardens along with farmland and Mediterranean views add to the beauty of the site. 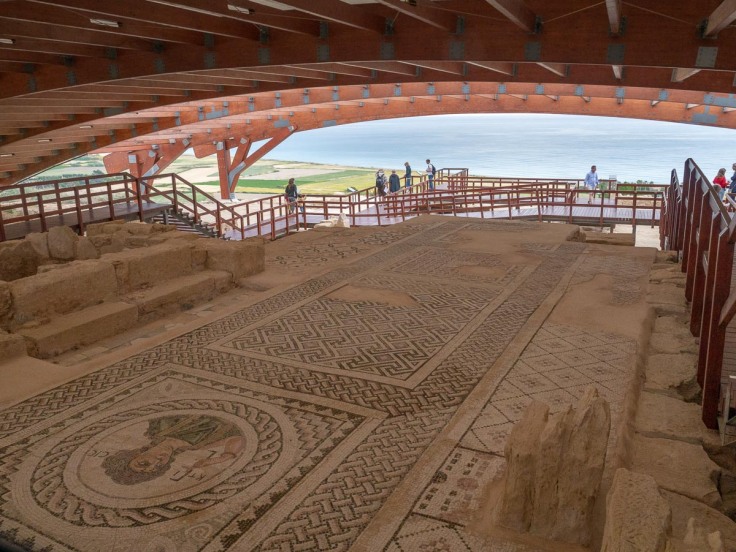 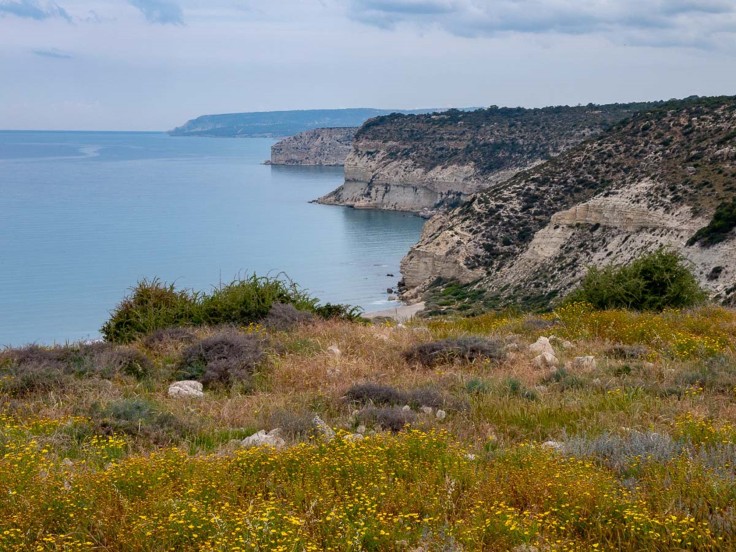 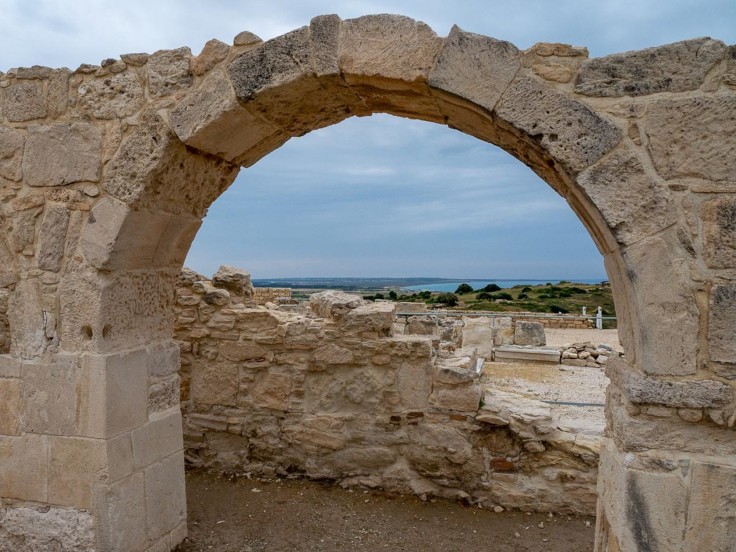 We had seen wine-tasting signs when we headed up to Mount Olympos. On one of our free mornings we drove up into the hills. There are numbered wine routes in the Troodos Mountains area (and themed wine routes that cover all of Cyprus). We just picked one that was not too far and tried to find a couple of wineries open for tastings. I especially wanted to try Commanderia, a historic wine (some say the oldest named wine). Indigenous grape varieties are picked late and then partially dried in the sun before this sweet wine is produced following historic methods. We managed one taste and it was delicious.

The wine villages are a treat to drive through, and the patchworked and terraced fields full of vines were just beginning to show their new green frosting. We were also surprised at the changing landscape though we were driving around a fairly small region. Much of the uncultivated mountain area is golden layers of clay and rock sparsely covered with scrub and trees giving the appearance of tufts of hair on a balding pate. At one point, though we drove through densely forested hills, not a bit of clay peeking through lush tresses.

Limassol is a seaside city on a small island country. Not surprisingly, there are beaches everywhere. We headed past the city centre to explore a peninsula and found long stretches of sandy beaches with nothing else around but the occasional seaside bar or restaurant. Behind these were Salt Lake and undefined sand roads perfect for offroad craziness.

In and out of the UK

While exploring the peninsula, we watched on Google Maps as we approached–and then crossed–the UK border, not a customs or immigration official in sight, and no passport required. There are still two areas of Cyprus that, combined, form a British Overseas Territory. The territory includes RAF bases (one of which, Akrotiri, has unfortunately been in the news this week), Salt Lake, parts of villages, beaches and roads. It seems that the public is only restricted from (and fenced out of) the military areas.

When we travelled fromTurkey, a 90+ percent Muslim country, to Cyprus, a primarily Greek Orthodox country, we expected to see a drastic change in religious buildings, from mosques to churches. Our experience with churches, cathedrals, and basilicas over the last several months had set us up for a bit of a surprise (probably because we have never visited Greece). The churches in Cyprus bear a surprising resemblance to the mosques in Turkey in that they all have domed rooves, arches are a predominant shape, and they both display a tall narrow structure at the front (bell towers for the Cyprus churches and minarets for the Turkish mosques).

We visited Cyprus at a lovely time, and left just as it got even lovelier. Temperatures were in the low 20s Celcius during the day, everything was green and blossoming, and the sea was just getting warm enough to swim in. Our host told us that it wouldn’t be long before everything would be turning brown and dry and it would stay that way for a good part of the year. Summer would bring too-hot (for me) temperatures and loads of tourists. 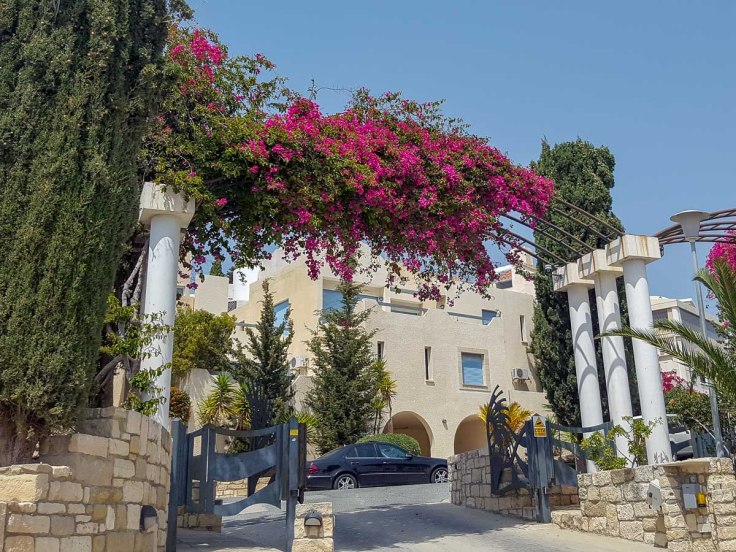 Easter in Cyprus follows the Greek Orthodox calendar so was a week later than in much of the rest of the world. It’s also a very important weekend-long holiday with long church services, family events, parties, and fireworks. Scattered around the city were oversized Easter decorations–baskets of giant red eggs, bunnies, and hens and chicks. Most of these were in medians and traffic circles, so we decided that stopping the car in traffic to jump out and take photos was a risk not worth taking very often.

Much of our enjoyment of our time in Cyprus was thanks to our charge, Tia. She kept us entertained, forced us out to explore beautiful places we likely wouldn’t have gone to otherwise, and greeted us so adorably when we came home from an outing without her.