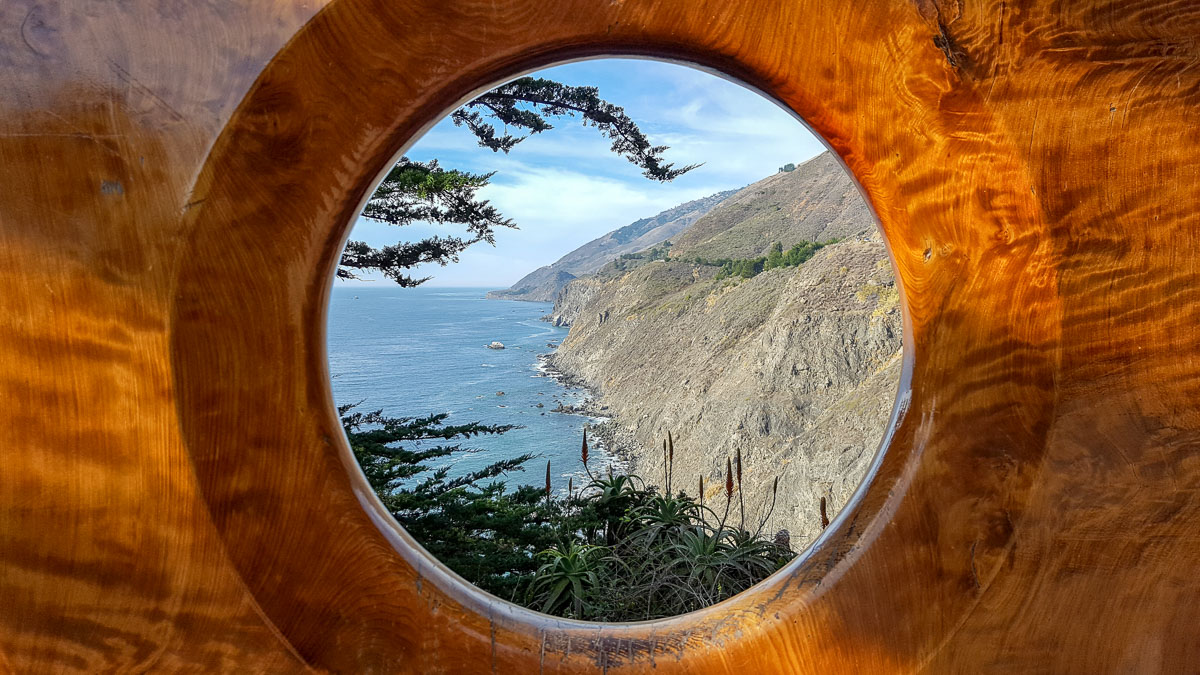 From Palm Springs, we headed toward the west coast of California. Our main goal was Highway 1 between Santa Barbara and Monterey, a route we had tried to drive many years ago when the road was closed due to flooding. After that, we were going to ease on up the Oregon Coast, taking several days at each stop.

Before heading north, we basked a little longer in the warmth of Southern California.  We had no plans to visit amusement parks or other attractions, and we needed time to work out the details of our next getaway.

For our first stop, we parked canal-side at the Wilderness Lakes RV Campground, in Menifee, California. This was a pleasant park with one open pool (the other was closed for the season) that felt too cold to swim in (but some of the kids didn’t notice), hot tubs, pickleball courts, and a decent mini-golf course. We had fun re-learning pickleball and demonstrating our lack of golf skills.

Groceries were a short (< 3km), flat bike ride away so we didn’t even move Artie until it was time to check out.

All day, every day, we were accompanied at our site by at least one person fishing for the catfish stocked in the canal, and many kingfishers trying to take a shortcut to their next meal.

Since we were camping at Wilderness Lakes over American Thanksgiving, and hadn’t been in our home country of Canada to enjoy a turkey dinner the previous month, we joined about 70 campers for a surprisingly delicious mid-afternoon buffet.

Our next stop was in the mountains just outside of Santa Barbara, at the Rancho Oso RV and Camping Resort. This campground also offers horse boarding, the opportunity to sleep in chuckwagon tents, and a small farm with goats and pigs. Horseback riding is available and campers are welcome to visit the animals.

Though we’re not fans of parking-lot-style campgrounds, and our small vehicle doesn’t require them, we did appreciate the view from our spot up on the hill.

We took a short drive to the Cachuma Lake Recreation Area, a 9,000-acre county-leased facility. Though there is a fee to camp or stay the day, they generously (and wisely) offer a 15-minute free pass so we were able to drive through the park and check it out. There is regular and group camping, rental yurts with strategically positioned decks overlooking the lake, a boat launch, and plenty of day-use areas with BBQs.

Finally, it was time to drive Highway 1. We had booked a campsite in Limekiln State Park, about halfway between Santa Barbara and Monterey, so we had time to stop along the 350 km (220 mile) route.

A little north of the Hearst beach, we pulled over to ogle the elephant seals at the Elephant Seal Vista Point. Most of them were just lying on the beach, periodically tossing the sand up over themselves, presumably to keep cool.

A volunteer told us that the males come up onto the beach from late November and stay until early March, and they are unable to feed during that time. Once they stake out their bit of sand, they stay put to protect it, fend off other males, and fight to become the dominant male who gets the gal. She also told us that their lying together didn’t indicate a fondness for each other, and the desire to cuddle up. Rather, it was to approximate the pressure on their bodies that they experience while in the water. Now what I’m wondering is how they figured that out!

Our campsite that night was under a bridge, though we did not feel at all like trolls. With our van, we were pleasantly restricted to using one of 9 beach-side sites (rather than the sites higher up and farther away from the water), which we had reserved. We were rewarded with a fiery sunset in the evening, and crashing waves in the morning, with the added bonus of a babbling creek right behind us.

As we drove away the next morning, we stopped to catch a quick photo of our campsite from up above. We couldn’t even see any campers the sites were so well-camouflaged by the trees.

We continued our journey up Highway 1 toward Big Sur and Monterey, marvelling at the cliffs, and the ocean waves crashing on the rocks where the mountains meet the sea.

We were so lucky with the weather. Where we joined this highway near Santa Barbara there was a flashing sign warning of rain predictions and possible road closures (especially frustrating as the highway had apparently just reopened following a massive slide). At Limekiln State Park, we were told that the rain was due in two days. We weren’t concerned as we planned to be off the highway before then.

After driving through Big Sur, we stopped for a little poke around the scenic Carmel-By-The-Sea, a village we would love to come back to and spend a few days.

Our campsite for the night was a return to the Russian River RV Campground, north of San Francisco and Santa Rosa. We had expected to run into smoke from the Paradise fires, but recent rains must have cleared the air.

The next day was a planned long drive (about 9 hours) into Florence, Oregon. We were going to stay several nights there and then make our way slowly up the Oregon Coast. Instead, another problem with our Alde heating system (see Artie: Working out the kinks for the history) had us making a beeline from Florence to Vancouver, Washington, with a late-night stop to sleep in Pacific City. Trying to sleep in Artie as we headed north in freezing temperatures with no heat wasn’t very appealing, and we were already hitting close to those temperatures in Oregon. So we prioritized a fast fix over more time on the Oregon Coast, vowing to return soon to this beautiful area.

If you are interested in RoadTrek details, here they are. The floor heating (restored to working condition a few weeks earlier) stopped working. With phone support from an Alde technician, Ken tried to redirect the heated water into the floor lines by pinching off a rubber hose. The hose sprung a leak, causing the glycol to drain out. We had to turn the whole system off to avoid a glycol flood.

With our heating system repaired (under warranty), we continued our northward trek, stopping for one night at the Chehalis RV and Camping Resort, and then two nights at La Conner, Washington, before crossing the border into Vancouver and catching a ferry to the Sunshine Coast.

Artie is now scrubbed clean, inside and out (thank you for all your help, bro Mike D), he has been fully winterized. and is now tucked in for his long winter’s nap.

We are off on our next winged adventure–I am writing this post from a patio table at our little hotel in Chiang Mai, Thailand.

One thought on “Artie: Hibernation”