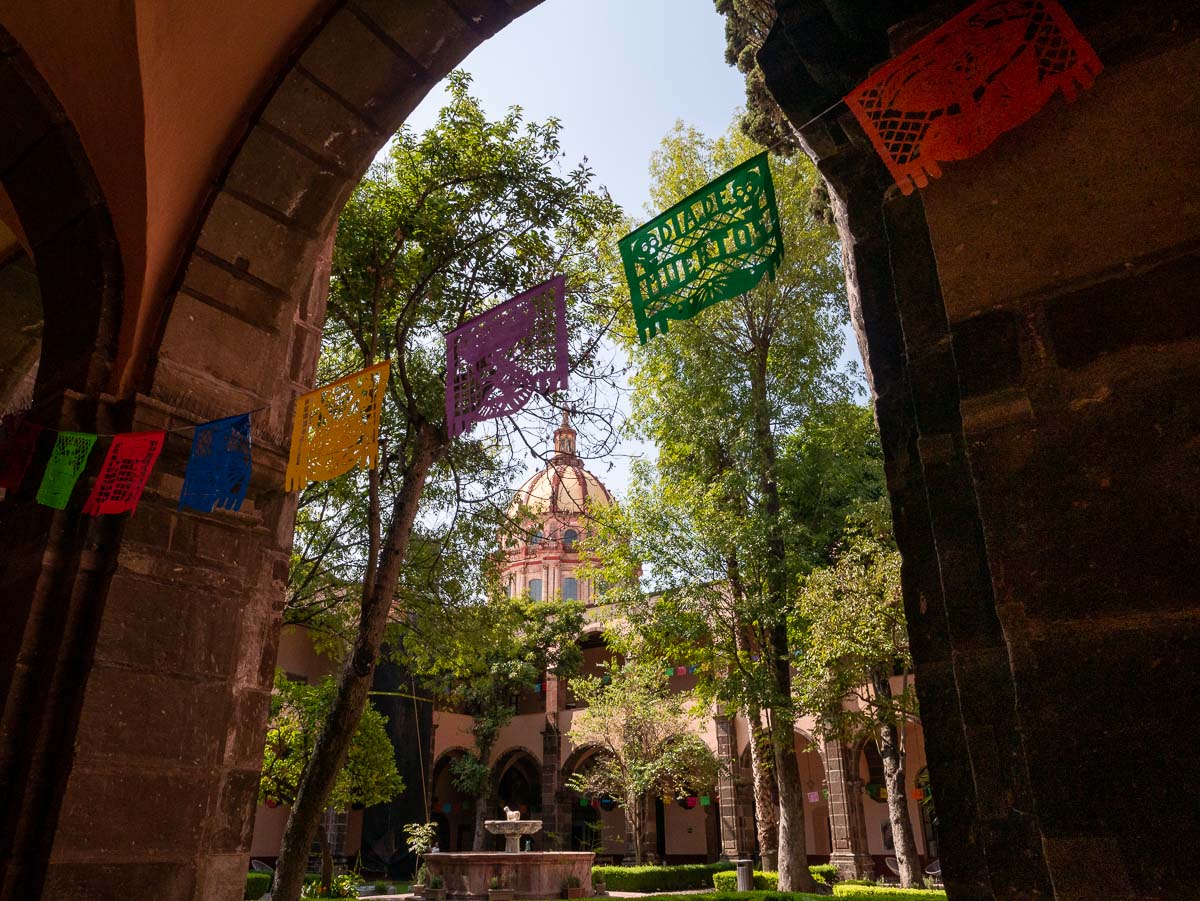 After Halloween and Dia de Los Muertos, life in San Miguel de Allende (SMA) settled down to a pleasant pace. We were house sitting in a three-level-plus-rooftop home a short walk from el centro, the historic town center. Our charge was an oh-so-easy-to-care-for meowless (but purrful) senior cat. Other than keeping her well fed and loved, our time and schedules were our own.

Though much of our daily life involved lazy coffee mornings (either at home or at nearby coffee shops) and walking to explore or to visit markets and shops for our groceries, below are some of the more interesting events and sights of our stay.

We visited Bellas Artes (or, if you prefer its formal name, El Centro Culturál Ignacio Ramírez El Nigromante) once when it was quiet and we could explore the building, and the second time when the hallways were filled with vendor stalls for the Lana y Latón (Wool and Brass) festival.

Constructed in the 18th century as part of a convent, it is now an art school, gallery, concert hall, music and dance studio. During our quiet visit, we were able to poke into some of the classrooms to see artisans weaving rugs and throwing pottery.

One room, which takes up most of one side of the quadrangle, is home to an incomplete mural. There are a few stories about why it’s incomplete. One is that the mural was being used by famous artists to teach perspective and other skills to students. A tiff broke out between or among some of the artist instructors and it was abandoned as a result. Though unfinished, the mural is protected and restored for all to appreciate.

There are other murals on the walls of the building as well, though when we were there they were rendered inaccessible by Día de Los Muertos altars that were yet to be dismantled.

Bellas Artes took on a completely different personality during the Lana y Laton festival when the hallways up and down were filled with stalls. Some were just sellers of the same trinkets that are available in other artisan markets, but many displayed beautiful woven rugs, lamps, and other unique and creative pieces.

A doctor and a dentist

I needed a quick visit with a doctor while in San Miguel. A check on one of the expat Facebook groups turned up great reviews for Unimed, a hospital and urgent care facility in town. We walked in and asked to see a doctor. I was shown to an exam room right away and within minutes a young doctor came in, dropped what looked like a foil-wrapped dinner into a drawer, removed his backpack and coat, and sat down. (I guess his shift was just starting.) This doctor gave me more time than I have ever been given by my GP at home. He decided I should have a lab test, and just wrote it up and sent the sample with a medical assistant since the lab was in the building. I asked how long the wait would be for results, wondering if I should stay or leave a phone number. He checked and received word that the results would be back in 20 minutes. We hung out on the comfy couch until the lab tech appeared with the results and the doctor motioned for me to come back in. In the time we spent at Unimed, nobody else came in or was seen by the doctor–I had the receptionist, the medical assistant, the doctor, and even the lab tech all to myself. The total bill came to $818 MXN ($56 CAD).

We also fit in dental checkups while in SMA. Expats again provided recommendations. I had tried to book ahead by e-mail with my first choice (based on the experiences of others) but didn’t receive a response. Our second choice was an easy walk, so we booked an appointment for both of us. The exam room, office and waiting area were part of a lovely residential compound. I was surprised at how fast the cleaning went (our appointments were only 30 minutes each), but Dra. Karla Carter explained that it was because she used ultrasound, something we had never experienced. The cost for each of us was $1400 MXN ($95 CAD). I think this is on the high end for Mexico, but it was less than half what we paid for the same services (except with manual cleaning) last year in Canada.

This museum contains an interesting and colourful collection of Mexican folk toys throughout history.

It is also worth a walk up to the roof for the views.

Opportunities for live music abound in SMA. We took in an afternoon jazz concert that was set up by loads of artists as a fundraiser for a fellow musician whose saxophone had been stolen. The venue, Paprika restaurant, provided a beautiful garden setting (they frequently hold live music events). The audience was mostly expats and travellers and the afternoon was filled with great music and cheerful people.

We read that there were murals to be seen in the Guadalupe colonia (neighbourhood). Though we searched for a map of the artwork, there didn’t seem to be one available. There is a walking tour if you want to be sure to see the highlights and understand the program behind them. We chose, instead, to walk into the area a couple of times and see what we could see on our own. There are so many murals, just strolling the streets of this typical Mexican neighbourhood resulted in many colourful and visually engaging images.

The mural program is called Muros en Blanco Street Art project. Though the website doesn’t offer very much information, fellow nomads and bloggers, Sue and Dave Pearse, (whereverarewe.com) took the tour and learned a lot about the program and its impact on the neighbourhood. Check out their blog post about the murals and tour here. The tour guide is the founder of the Muros en Blanco program. There are over 100 murals now, with more being added each year (we found only a fraction).

The Tuesday Market is a big event held above el centro. An Uber took us on a highway route around and out of town to get there ($65 MXN, $4.50 CAD) but we caught a bus (buses frequently come in and out of the street in front of the market) marked centro to head home ($8 MXN each, $.55 CAD. The bus bumped along from the market down a long, cobblestone street into town, where everyone had to disembark. A different bus would have taken us closer to home, but walking through el centro is not a hardship, and it allowed us to knock off a couple of errands on our way.

The market itself is huge. We started in one building and could see other covered structures behind us that we would visit later. At the end of the first building, we could see another, equally large one across a laneway. And at the end of the second building was a third. There didn’t seem to be any groupings of merchandise types. Produce stands were followed by electronics, tools, new and used clothing, shoes, candy tables, and eateries. Mobile shops moved through the aisles–a wheelbarrow full of pecans or a display of every remote control imaginable. The market was clean and tidy and well attended with many people stopping for desayuno (breakfast – the gorditas were delicious!) before or after they shopped.

We spent a wonderful evening at Luna Tapas Bar, the beautiful Rosewood Hotel’s rooftop restaurant–something everyone we spoke to said we must do once. The restaurant affords almost 360-degree views of the city. We arrived at dusk and watched as the sun set and the city sparkled, with San Miguel’s iconic churches front and center.

Adding to our enjoyment of the evening was our table neighbour, Amor, who hails from Mexico City but lives and works in SMA now. As we tried to decide on a menu item to order, she offered us tastes of hers. Later, when she ordered a flatbread that was too much food for her, she insisted that we each have a slice. Such generosity! Many of the restaurant’s staff members seemed to call at her table, bringing a hug and cheerful conversation. Amor told us that she used to work at the restaurant, but now is supervising at another hotel in el centro. (She even invited us to come and said she would buy us breakfast.) Enjoying her one day off (she works six days a week, 10-12 hours a day, apparently common in Mexico) included coming to this restaurant, enjoying a drink and some food, and seeing her friends.

Walking around the city, we often ran into some form of entertainment like mariachi bands, mojigangas (giant puppets) leading wedding guests to a reception, and even the finish line of a half-marathon run. One evening we were entertained by a line-up of folk dances performed by a high-level dance troupe. The dance performances were colourful and thoroughly enjoyed by the mostly local crowds taking it in. We had some laughs when the final set included a dance that involved balancing a full beer bottle, and then trays of full glasses and a beer bottle, on each dancer’s head while they stomped and twirled around the stage or on top of little wooden boxes.

We also spent plenty of time at the house we were taking care of. The rooftop views were stunning, there were loads of plants to water and putter with, colibris (hummingbirds) to feed, and a cat, Ziza, to feed and cuddle.