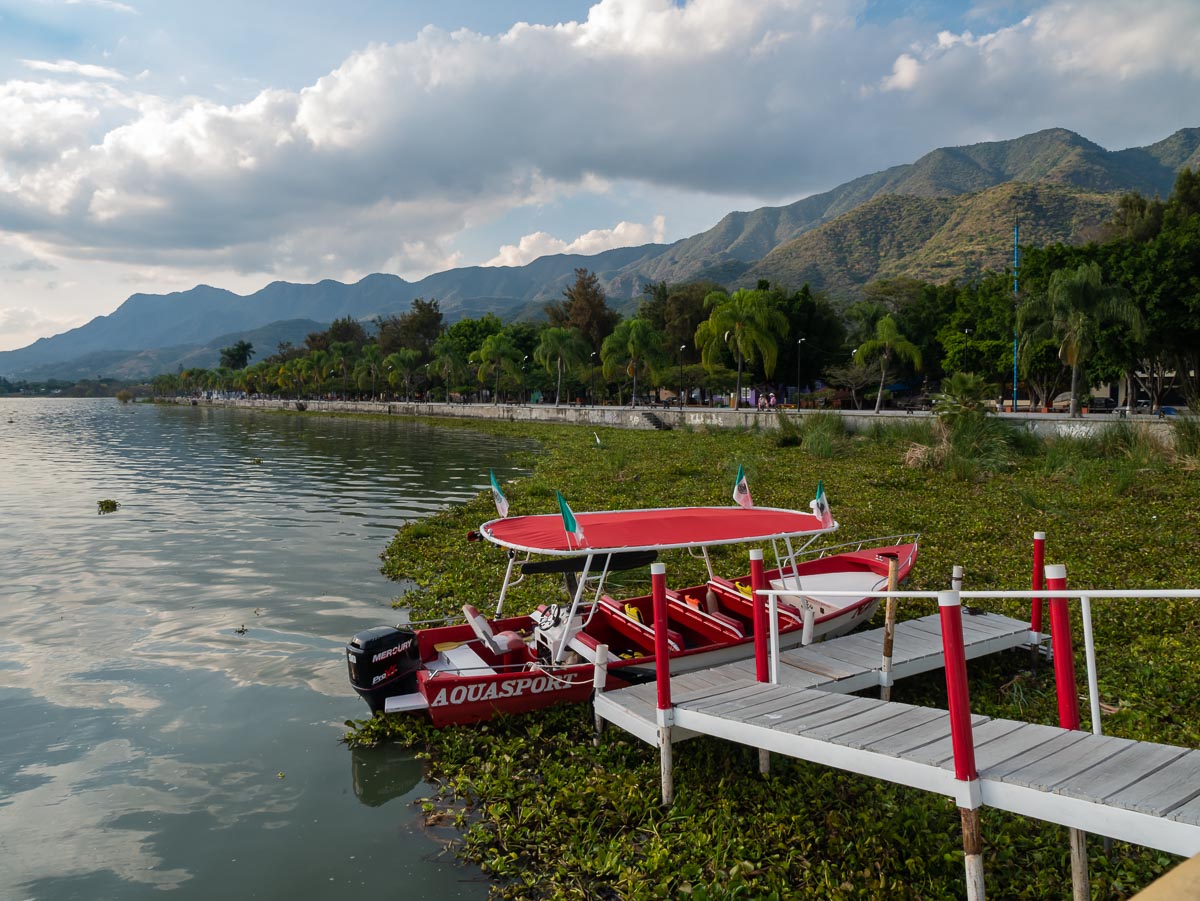 Noise was the theme of our time in Ajijic. Most of the time it was happy noises, sometimes just a little too much (or too late or too early), and once it was joyful noise that soothed our souls.

We bused directly from our last house sit in San Miguel de Allende to another housesit in Ajijic, this time with a wiry 14-month-old pup called Namo and a chill young cat, Bhodi. The animals were fun, the homeowners lovely and generous, and the home comfortable. The casita (guest suites) construction project that we thought would be done before we arrived was not. A block of casitas right next to the house was in progress and work continued for 5 1/2 days a week (the sit was only for 9 days), accompanied by loud radio music that we could only drown out with music of our own inside the house. The views from the rooftop of the casita are fantastic and we hope to return to see the resulting suites and gardens, which promise to be quite lovely.

A couple of days before we arrived, our homeowners let us know that a festival for the town’s patron saint was in progress. Great, we thought. What fun! We didn’t realize that festivities would continue for the entire housesit period, and that it meant fireworks starting as early as 5:30 a.m., bands playing in the nearby plaza until as late as 3:00 a.m., mariachi bands parading through the streets morning and evening, and church bells ringing long and loud at all times of the day and night. Welcome to Mexico!

It wasn’t all noise, of course. Ajijic is one of several towns spread along the shores of the shallow but expansive Lago de Chapala (Lake Chapala). The lake is about 80 km (50 mi) wide and 12 km (7.5 mi) across and sits at 1,500 meters (5,000 feet) above sea level. Forested mountains surround the lake forcing the towns to develop close to the shoreline and adding a beautiful backdrop for the colourful buildings and water scenes below.

Our homeowners connected us with friends who kindly picked us up on a Tuesday morning, brought us to a French pastry and coffee shop for breakfast, and then introduced us to the weekly organic market. The shoppers were almost all ex-pats, and the lineups for fresh-looking produce and herbs were long (this was the Tuesday before American Thanksgiving, which might have had an impact). The market was also filled with gluten-free baked goods, goat and other cheeses and dairy products, honey and many other natural/organic/specific-diet products.

Another wonderful connection was a house-sitters meet up where five house-sitting couples and one friends-of-house-sitters couple, all Canadians coincidentally, met for lunch and a good chin wag. It’s always fun to meet others who are as crazy as we are (or even crazier)!

Ajijic and Chapala, along the north shore of the lake, and Jocotopec at the west end, all have pleasant historic districts and lakeside malecónes (boardwalks). We spent plenty of time on the Ajijic malecón, especially when walking Namo, our house-sit dog. Leading away from the lake toward the mountains are several streets that contain shops, hotels, and restaurants. On separate days, we took the bus to Chapala and Jocotopec to spend a few hours exploring each of these neighbouring towns.

There are loads of great restaurants in Ajijic, in part due to the high number of ex-pats from the US and Canada. Prices are reasonable, even in the mid-range restaurants with cuisines other than Mexican. There are also kiosks and small shops with local foods aplenty, and since the festival was on, lots of booths with street foods (including pizza) in the main plaza.

We heard about a “secret bakery” and asked our homeowners about it when they returned. They pointed us to a place only a few blocks away, but where you would likely never go without being directed there. We arrived a little before the sweet goods were due to come out of the oven and were able to watch as paddle after paddle filled with golden, crisp, aromatic treats were pulled from the brick oven. We purchased four cinnamon buns and two cookies (we were sharing with our homeowners, so no judgment) and paid $35 MXN ($2.40 CAD).

After our housesit ended, we stayed two extra nights in Ajijic. We made a last-minute decision to switch our hotel booking to La Nueva Posada and were so pleased that we did. The “new inn” is now 45 years old but she is quite grand. Our room was on the third floor with a beautiful view of the lake, and a delicious breakfast, served in the lakeside garden, was included.

We finished our visit to Ajijic immersed in beautiful noise. We had learned of a choral group, Los Cantantes del Lago, from a couple we met in Chiangmai, Thailand. They spend much of the winter in Ajijic, and much of that time rehearsing and performing with their beloved choir. A Rose in Winter was the title of the concert we attended, and it was a joyful, spirit-lifting evening. It even included a medley of sing-along carols so we could get our own vocal cords warmed up for the season. If you are around Ajijic in the fall or spring (they do two concerts a year), do check them out.

One thought on “Ajijic”