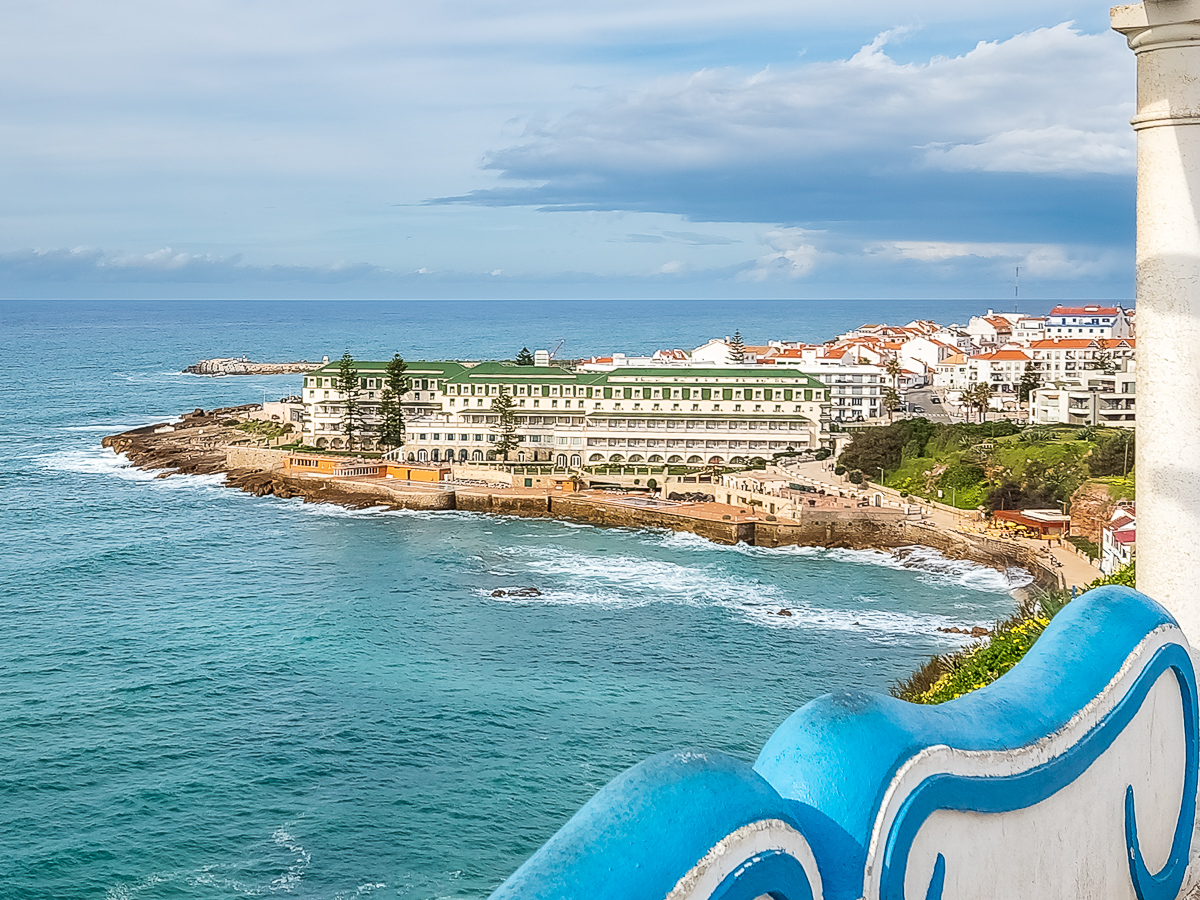 The Silver Coast region of Portugal includes Coimbra and Aveiro, which I’ve covered in a previous post, but this post touches on quite a few smaller towns and areas in the region. We stayed for a week in a little village called Carregal, a few minutes away from Óbidos. Since we had a rental car it was easy to explore.

Óbidos is a quaint, medieval, walled village filled with homes, shops, and restaurants. A large free parking lot just outside the gate walls made visiting the walled medieval city of Óbidos easy. Since we were staying nearby we ventured in several times, including for dinner with another nomadic couple who were staying in the village for a couple of nights.

A fun (and slightly terrifying) thing to do in Óbidos is to walk the perimeter high up on the top of the city walls. There are no handrails and passing others can be a bit tricky, but it’s a great way to see both the enclosed town and the surrounding lands (if you’re not shaking too much to check out the views).

We were in Óbidos during Christmas festivities and the castle was closed off for paid kiddy activities. We’re not sure what we missed in there, but the rest of the town was lovely to walk through.

Nazaré’s claim to fame is its huge waves at Praia de Norte, 15 to 20 metres or more at their highest thanks to a massive underwater canyon. We stopped at Praia de Norte, on the north side of Nazaré, but the waves were very quiet during our early December visit. Check wave prediction sites to try to see the big waves, generally October to March.

Between the protected and swim-friendly beach town and the rough-and-tumble Praia de Norte surfing beach, the old town of Sitio sits high atop a rocky promontory. If you’re down in the town of Nazaré, take the funicular to the top for impressive views, historic buildings, restaurants and tourist shops. From there you can hike down to a 16th-century fort (we didn’t), currently hosting a surfboard exhibition.

On our way to Ericeira, we made a quick stop in Mafra for coffee without really knowing what to expect there. We discovered that the town is utterly dominated by the massive Mafra National Palace. As luck would have it, the palace was closed on Tuesdays, which happened to be the day we visited. At only €6 to enter the palace, it would be worth planning a visit on any day but Tuesday. A wonderful free exhibit of traditional Chinese musical instruments was open in the Galaria Torreão Sul (in the palace complex) and we enjoyed a walk-through.

Another important surfing location, Ericeira is one of only nine World Surfing Reserves, offering several surf spots along a four-kilometre stretch of beach. For us, though, it was a pretty seaside with a bit of its fishing port heritage still evident.

Only 30 minutes from Óbidos, Peniche is a town on a little piece of land that looks like it could disconnect from the rest of Portugal at any time. Hanging off of Peniche is Ilhéu da Papôa, another not-quite-island filled with fascinating rock formations, which were great fun to tromp around and explore.

This sculpture garden was a wonderful outing from Óbidos, one we probably wouldn’t have been able to do without the use of a car. Connected to Bacalhõa Winery and part of the brand’s Art, Wine and Passion project, it was built in response to Taliban destruction of thousand-year-old Buddha statues and art pieces in Afghanistan’s Bamiyan Valley. Also called the Buddha Eden Garden of Peace, this 35-acre park houses sculptures and water features in a park-like setting. We were a little overwhelmed when we first walked in, unsure of which way to turn. We let our feet guide us and spent three hours discovering all sorts of visual delights. The exit takes you through a wine store showcasing Bacalhõa products.

Caldas da Rainha is the nearest larger city to Óbidos, and where we would be returning our rental car and boarding our bus to Lisbon. It’s not a particularly pretty city but is known for its ceramics factory and store, and the ceramics museum. We walked to the Museu da Cerâmica, which is housed in a 19th-century manor, paid our small entry fee, wandered a bit in the gardens and then entered the house. The fellow at the door let us know that there were three floors to view. After a bit, he reminded us that there were still two floors and we didn’t have much time since he would be locking up for his lunch break. We rushed through and managed to see everything, if a bit more briefly than we would have liked.

Not far from the museum is the factory store. The upstairs discount area was pretty packed when we arrived (I think this is a tour stop) and we got out fast, but if you’re in the market for locally made ceramics, it might be worth a visit.

We detoured through Parque Dom Carlos I on our way back to our car. Across a pond stands what appears to be a majestic, multi-winged historic building until, on closer inspection, it reveals itself to be completely abandoned. It was originally designed and built in the 19th century as the new hospital but never served that function. Instead, it was a military barracks, a police station, and, quite recently, a secondary school.

We drove out to São Martinho do Porto because a) it was on the coast, and b) we like the look of its lagoon on the map. Once there we found a couple of roads that led up to great viewpoints. It is just a smallish town with a gorgeous white sand beach and calm waters–the land enclosing the lagoon has only a few-meter-wide opening.

One thought on “Óbidos and (More of) the Silver Coast”