As we pack up from our first month of Life: Phase Next, a month spent in a condo in Quito, Ecuador, we look back fondly–or, in some cases, not so fondly–on some aspects of this city.

Quito is a long, narrow city in a valley. We could walk a fair distance on relatively flat ground, but any east-west travel, or walking south into el centro historico, meant hills. Lots of hills. Steep hills. Not such a bad thing once you adjust to the altitude, unless you are nursing an injured knee. Then the down slopes aren’t your friend. 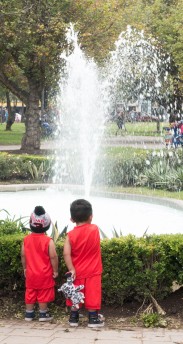 We really enjoyed the large green spaces in the middle of the city, especially Parque Carolina and Parque Elejido. They are a wonderful respite from the noise and air pollution of the city.

We also love the idea of family day (Sundays) at the parks, where there is entertainment, loads of food carts and kiosks, and lots of folks socializing and enjoying each other’s company. And the closure of an important traffic artery, turning it into CicloPaseo, a long on-road and through-park cycle way adds to the fun. 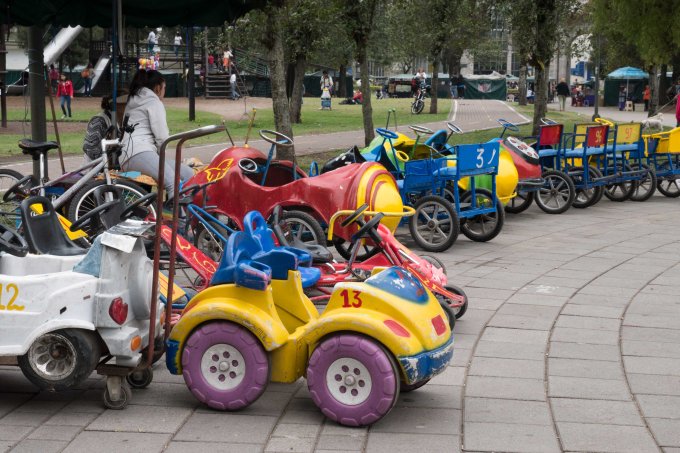 For the entire month we’ve been here, the only considerations for weather have been whether or not we wear a sweater in the morning and at what point in the day will the rain likely hit. High temperatures have been 18-22°C, lows (only in the wee hours) around 10°C. Though our apartment, like most accommodation here, has neither heat nor AC, these temperatures have been quite comfortable to live with. A typical hourly rain forecast looks like this:

So you just have to figure out where you will be when the rain is likely to hit, and decide if you should carry a raincoat. We basically carried raincoats every day, all day.

Buses, of which there are many, spew diesel smoke. At rush hour, with buses lined up nose to tail, belching black smoke with every stop and start, the busiest streets are unhealthy to walk alongside. Sundays, when a key thoroughfare (Amazonas) is closed for bike traffic only, were so refreshing as we were able to walk long distances in the inner city and still be able to breathe. I can’t imagine what the lungs look like of folks who walk alongside (or ride on) these buses regularly. Trucks have the same problem, but in el centro norte (modern city center) and el centro historico (you got this one), the buses are the biggest issue. 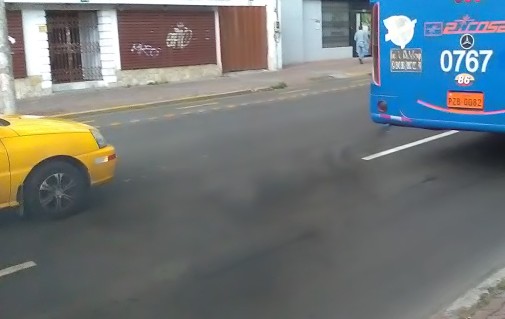 I think we have seen one person in a wheelchair or scooter the entire time we have been here. I’m pretty sure that it’s not because Quito doesn’t have its fair share of differently abled folks. Or maybe they don’t live here, because if they did they would be prisoners in their homes, or forced to travel everywhere by private car or taxi. Sidewalks are tiles, cobblestones, patches, holes (or even craters), protuberances, steep angles, or non-existent. They can also have cars parked on them so you have to go out on the street to get around.

So, to cross the street, you simply watch for an opening. Ignore the lights. They are irrelevant. Ignore the police directing traffic–they aren’t looking out for pedestrians. Just find an opening for half the street, and get yourself to the middle where you can look for an opening for the other half. Caution: on several major streets the bus lanes and stations run down the center, so you must also find an opening between buses travelling in each direction, and there often isn’t a median in those situations. You could try waiting for a green traffic light in your direction if there isn’t a pedestrian crossing light, but a) you’ll be waiting alone and feeling silly as everyone heads out into traffic, and b) if you try to rely on the light you may be knocked over by a right- or left-turning vehicle. To them, you are irrelevant, remember?

This approach to pedestrian crossing seems to work just fine once you get the hang of it.

I suspect driving lessons here include: hand position at 10:00 and 2:00, thumb hovering over the horn button, ready to press at all times. Taxi drivers (and there are many of them) honk several times as they drive by to make sure you know they are driving by, just in case you haven’t realized that you want a taxi, but their honking will alert you to the fact that you do and cause you to wave them down. Everybody honks as they drive fast down a narrow street, head into an intersection that might not be completely clear, when traffic is backed up (it’s got to be somebody’s fault, right, so let’s everybody honk aggressively–it’s sure to resolve the traffic snarl), or just because.

We enjoyed this about as much as we enjoyed the honking. It didn’t help that our condo was just around the corner from a car alarm installer. And that they needed to test (or demonstrate?) their fine work by running every alarm they installed through its paces. Starting quite early some mornings.

But beyond the alarm installation company, alarms went off everywhere. We would even see people sitting in their cars and testing (playing with?) their car alarms. Crazy!

What’s not to love about lunches everywhere for $2.50-$4 a person, which includes a soup/starter, main, fresh juice, and often a small dessert.

One beef: No prices on online menus (for meals other than almuerzo, or lunch). We’d see a restaurant, check it out online to see what was on the menu, and there were never any prices.

If you have a craving for your favourite food from “back home” (we haven’t yet), there are lots of options here: KFC, McDonald’s, Subway, Papa John’s. Other restaurant chains, too, like Tony Roma’s. 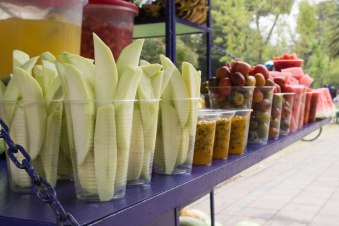 In a previous post, we mentioned our love for the inexpensive and plentiful produce, especially in the markets.

Ken enjoyed the relatively cheap beer (about $1 each in stores). We had no problem finding most items we looked for, with a couple of exceptions:

Before we arrived, I didn’t like reading all of the cautionary tales and admonishments from other visitors and expats: don’t go walking after dark (dark is about 6:30pm), watch for pickpockets everywhere, don’t wear any jewelry (even wedding rings), don’t flash valuables like cameras, beware of taxis, and buses. Since we enjoy walking about wherever we are, taking public transit, and look forward to photographing new and interesting places, we weren’t sure if we were going to feel too restricted. We have been in many countries, some with similar warnings, so we tried to be pragmatic. We started slowly, walking short distances to go to dinner, taking cabs, putting a camera in a backpack and then Ken “standing guard” while I took pictures.

For the most part it worked out well. Except for the time I accidentally slipped my cell phone into my back pocket. And then got onto a bus. And it disappeared between the time I stood up at the door to get off and when I stepped onto the station platform. Very frustrating and discomfiting. Lesson learned.

Is Quito that place? No, definitely not. 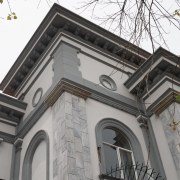 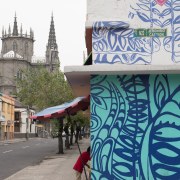 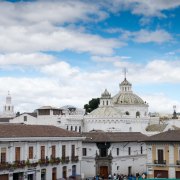 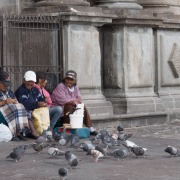 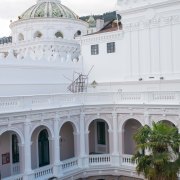 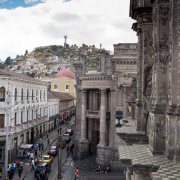 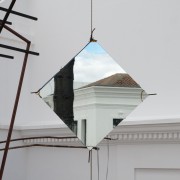 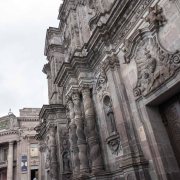